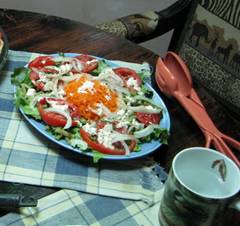 Once again, my friend Maricarme gave me a reason to write a post.

She was very tired, for she has spent her time, much like the majority of the women in my planet, cleaning the house, organizing wardrobes and sideboards, dusting off decorations, and stretching out the little bit of cash she has just to be able to greet the new year the way it should be.

She wanted to make a good cold salad for the 31st. Worn out from so much end-of-year cleaning, she went out on a search and capture for food. As she did so, she passed by a place where they sell pork meat (the only one that does) and out of the corner of her eye she saw the pork chunks, and this image stayed in her brain. When she arrived at the hard currency kiosk, without realizing her mistake she asked the attendant, “Do you have meat?”

The dispatcher was astounded and responded, “No ma’am, nothing like that”.

So she asked, “By any chance do you have a can of fruit”?

“No ma’am, not that either,” and he continued, “but look you should go home, take a good shower, go to sleep for a while, and later, when you’re more refreshed, you can come back here and I’ll be glad to help you.”

My friend tells me that, upon returning to her house, she could not control her laughter for the scene she had just created.