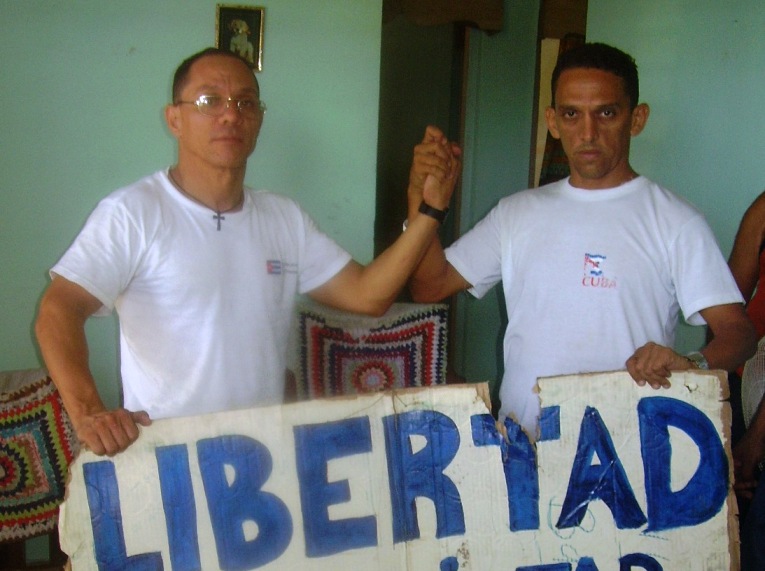 Despite the fence and police surveillance that I’ve won by being a disobedient Twitterer, I was able to go to Guantánamo on November 8. I knew that Rolando Rodríguez Lobaina, José Cano Fuentes and Yober Sevila were already back home after their arrests and beatings from October 31 in Banes, and their confinement in the cells of G-2 until November 2 in Holguin.  There Rolando tells me that while I was traveling to the other end of the island to deliver to X the recent issues of the Valencia Solidarity Project journals, that would be placed in the virtual village in their traditional PDF format, he was charged with total discretion to compose another story.

Rolando as Coordinator of the Eastern Democratic Alliance was articulating the methods for how to carry out his call to pay tribute to Orlando Zapata Tamayo and give the honor of Mother of all Cubans to Reina Luisa Tamayo. It had to be there in the place where they buried the Cuban who marked, with his death, the last days of the dictatorship. But getting to Banes seemed almost impossible because on Thursday they closed off the town, with the G-2 soldiers everywhere with a list of names and a catalog of photos in hand to identify anyone trying to come into the town, so there had to be a change of plans. While he was doing it he didn’t tell me and I didn’t ask him. I just heard his version of the events and I am posting here a portion of the transcript of his account, as I promised earlier in the post Pieces of an Assault:

“The march was in progress and we were in the cemetery. Once we were at the foot of the tomb of Zapata, everyone started to come, all of them in droves. Hundreds of soldiers were divided into three blocks. A block came into the cemetery from the rear, another block occupied the right side of the cemetery exit, and a third block arrayed themselves on the left hand side with the buses and patrol cars located where we would have to exit.

“Once we saw that the assault was imminent, we decided to link ourselves together, locking arms, and put the women in the middle and leave in a block like that. When we got to the bottom of the cemetery they fell on us. They were pulling, taking us out of the cordon, beating and kicking us. One of them used martial arts on me, around my neck, nearly breaking it. And when I was locked in that position another one came and gave me several punches to the ribs, the body, and so they savagely, brutally, forced us into the buses that were also full of officers from State Security. They pushed us in there. I saw them beating Ramoncito from Mesa de Banes, and Rogelito, Zapata’s brother, it all happened too fast to deal with it.

“Reina was in the middle but I don’t know why as they were pulling on us as we tried to protect her, everyone was in the middle of the floor because we started to sing the national anthem and all that, but I can say we were brutally repressed with kicks and punches and thrown violently onto the buses. And in the buses, between them shouting ‘Viva Fidel’ and us shouting ‘Down with Fidel!’ and ‘Down with Communism’ and ‘Down with the Dictatorship’ and all these things, they drove us to the headquarters in Banes.

“First they took the people from Gunatanamo and took us out and put us in a convoy of patrol cars, and then took us to Pedernales (The G-2 Training Center in Holguin). There in Pedernales we learned from the same soldiers that since early in the day there had been a platoon of patrol cars going to Banes, so the contingency was already prepared. So they broke us up and put us in different cells on the double. It was very full of police and guards there at the center of criminal investigations, of Pedernales operations. So  there we were shouting slogans.

“They kept us there until Tuesday when they took us to Guantanamo in police cars, but not before giving us a series of police warnings and threats. They talked about applying Law 88 to us, the well known Gag Law, and tried to get us to sign the warnings but as always we refused to sign this paper because we have not committed any crime and they have committed them in violating our rights as citizens. This time when we refused they brought video cameras to film the moment in which they extended the document to us and we said we wouldn’t accept it. They said making this video recording would constitute proof to the authorities.

“We were from different provinces but in our case it was three from Guantanamo and two from Baracoa. I don’t know any more about what happened with the women or with the other brothers who were arrested and beaten. On Tuesday night they took us back to where we live. In the case of Rodolfo Barthelemí and Francisco Luis Manzanet who live in Baracoa, they took them but didn’t leave them in the town but rather they dropped them on a road where cars rarely pass at night. They told me that they weren’t able to catch a ride and go back to their hometown until morning.

“That day there were several messages on Twitter about what was happening there, and some calls made to call the attention of the free world to what was happening when we left the cemetery, and we managed at least to basically cross the cordon. I thought about the repercussions of what had happened and because thousands of people knew about the aggressions and arrests and that the G-2 cut all telephone and cell service so that no one could call, so that there wouldn’t be a repeat of the incident too soon But on Sunday, the 7th, when I got my phone back, and Reina’s and yours had lost all ability to receive or send calls, I realized again that those beasts had invaded Reina’s home. We have to keep going into the streets of Cuba to make them value our rights.”

Here is some evidence of what we are talking about, although I transcribed the complete conversation.