Preliminary Note to readers: For reasons way beyond my control, I did not have the chance to update the blog for many days. The Desdecuba.com page was hacked twice, and Yoani Sánchez and other friends are still trying to get it fixed. I am posting a new article, and I hope complete service will be established soon.  Thanks and hugs to all friends. 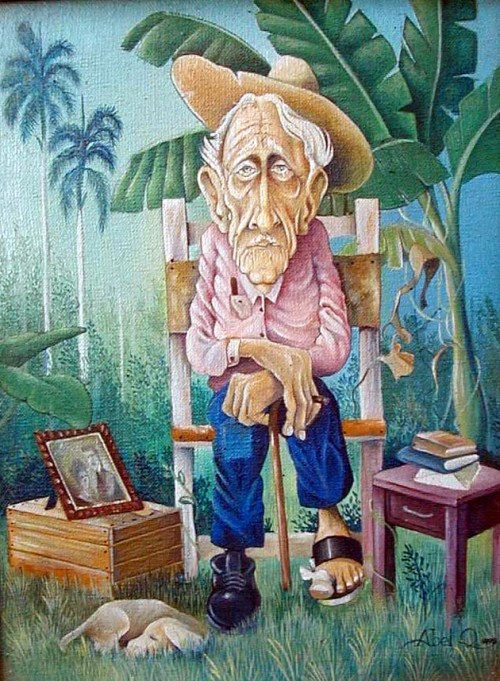 Nobody listens to his stories any more. Work of Cuban painter Abel Quintero

It’s true that in Cuba there is no freedom of the press. In its place, press licentiousness, as prolific and thorny as the invasive marabou weed, has developed. It is a peculiar way to “report”, and, as crazy as the results are, (or perhaps because of it), it’s very consistent with the system.

The press is one of the indicators that most markedly evidences signs of change, a constant that has an influence even in societies such as ours, where secrecy rules.  Some of the readers with sharper memories will remember that, during the period of Castro I, we experienced an absolutely triumphant press: all  the milestones of the three first decades of the revolution were positive, crop and livestock production grew each year, indicators of health, education, sports and culture marked an unstoppable upward course, the harvests were huge, and so were all the line-entries that heralded an economic splendor always knocking at our doors, without ever entering our lives.

Not even the 1990’s crisis was able to destroy the vibrant spirit of a kind of completely alienated optimism.  So the press repeated each inspired and inflamed phrase of the Great Orate, and we didn’t have food, clothing, shoes or fuel… but we did have “dignity”.  We also had the celebrated battle for Elián, one of the most resonant Pyrrhic victories in Cuban history, in which substantial resources were spent while people went hungry, and a while later we had “Five Heroes”… who, some day, will “return”. Then came the open tribunals each Saturday in different municipalities throughout Cuba, squandering what we didn’t have, and the absurd Round Tables were instituted.  The press had the mission to inflate the balloons that substantiated the indestructible success and the indisputable superiority of the tropical socialist system, despite the collapse of the USSR and the abrupt disappearance of subsidies.

But it has been under the period of Castro II that licentiousness of the press has reached its climax, especially in the heat of the “opening” marked by the so-called government reforms, where the economic parameters sealed the full apogee of an original way to “report” under which things are not what they seem, but something completely different.

This explains why, for example, official figures reported a modest GDP growth at the end of 2012, and, paradoxically, at the barely ending first trimester in 2013, an expanded meeting of the Council of Ministers acknowledged hereto unspeakable evils in the Cuban economy: lack of productivity, inefficiency, defaults, lack of organization and lack of discipline, among others, that prevented the fulfillment of the plans.  Nobody bothered to explain this strange way of “growing” by being unproductive.

Indicators of the progress of the harvest and sugar production were recently published, with very poor results, and, compared with the same period last year, a decrease in foreign tourist arrivals has been reported for the month of February, 2013 (full peak of tourist season). However, the press ensures that the investment plan will continue for that “priority sector” and that an increase in revenue is expected on this line-entry of this important economic sector.

The Moa nickel plant ceased production, however, the General-President insists on “the need to work to guarantee the assured external income, including those derived from the export of nickel and sugar”, although the country is forced to import sugar just to meet domestic demand. In his words, “we are moving at a great pace despite the obstacles”. With such news, it seems clear where progress is moving, but there is no doubt that this informative coven lurching between chaos and optimism is the mirror image of the national condition.

In short, the press turns out to be more licentious the more representative of the Castro II “transparency” it is. But there is nothing to wonder at, according to the dictionary of the Spanish language, some synonyms of the word “licentiousness” are: impudence, obscenity, indecency, dishonesty, shamelessness, among others. I guess that, once the terms are known, nobody will deny that licentiousness of the press in Cuba is enjoying perfect health.