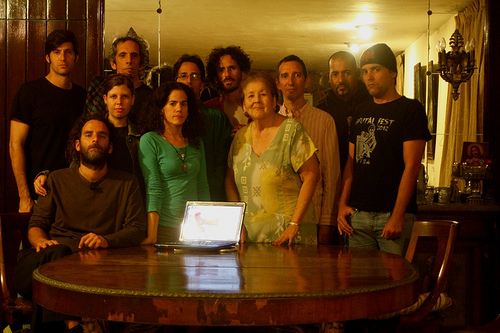 On Wednesday, November 7, a group of citizens was arrested outside the so-called Section 21 of State Security, at 31st Avenue and 110th Street, in the municipality of Marianao. The group of about ten people was there to inquire about the legal status and whereabouts of the attorney Yaremis Flores, who was arrested without due process hours earlier.

This was the first of a series of illegal arrests that extended into the next day, when several friends and supporters went to the Acosta Station, between 2nd and 3rd, in the Diez de Octubre municipality, to inquire about the causes of what happened. Other solidarity groups took to the streets in the interior of the country, also victims of arrests and repression. These arrests were accompanies, in the majority of cases, by the cutting off of telephones with the complicity of the companies CUBACEL and ETECSA. Among those arrested were many activists related to the Citizen’s Demand for Another Cuba, which has been developing, in recent months, a campaign which aims to make the Cuban government ratify the International Covenants on Human Rights that Cuba signed in 2008.

Today, 72 hours after the violent arrest of Antonio Rodiles, principal coordinator of the Estado de Sats project, and 48 hours after the equally violent detention of the writer Angel Santiesteban, both remain behind bars, on hunger strike, without seeing the sun, without their right to make the telephone call as required, and without communications with their closest family members. We assume that the main reason of the delay in their releases is to hide any traces of the severe beatings to which they were subjected at the time of their imprisonment. So far, it is unknown precisely what the situation is with regards to their physical condition, and the future evolution of both intellectuals.

Police harassment, arbitrary arrests for political reasons, the abuse, and the imputation of crimes not committed, are procedures that are completely outside the law and that were being reported recently by the lawyers Yaremis Flores and Laritza Diversent (CubaLex agency), to the Office of
High Commissioner for Human Rights and the Working Group on Arbitrary Detentions, in a detailed register of persons who are at risk. Governance in Cuba has become pure repressive praxis, far beyond any supposed ideological sign.

We hold Cuban State Security responsible for their actions with regards to the life and health of Antonio Rodiles, Angel Santiesteban, and any other detainee whose arrest we do now yet know of. The national police should refrain from carrying out arbitrary directions and illegal orders and psychological pressure as ordered by State Security. It should ensure the strict compliance with the laws, the rights of citizens and safety, by the State and not by a government whose legitimacy has expired, for the Cuban nation and not for the so-called Revolution.

We demand the immediate release without charges of Antonio Rodiles and Ángel Santiesteban. We demand the purging of responsibilities between the paramilitary and the officials involved in these events outside the laws of our country.

This is the legitimate claim of a civil society that is not restrained by any coercion nor driven by violence on the part of power and that does not relinquish even one of the spaces we have gained.

We thank the international community for the sensitivity it demonstrates toward our struggle. We urge all Cubans, wherever they are, to continue in solidarity with the aspirations of justice and freedom in our society at this definitive historical juncture.