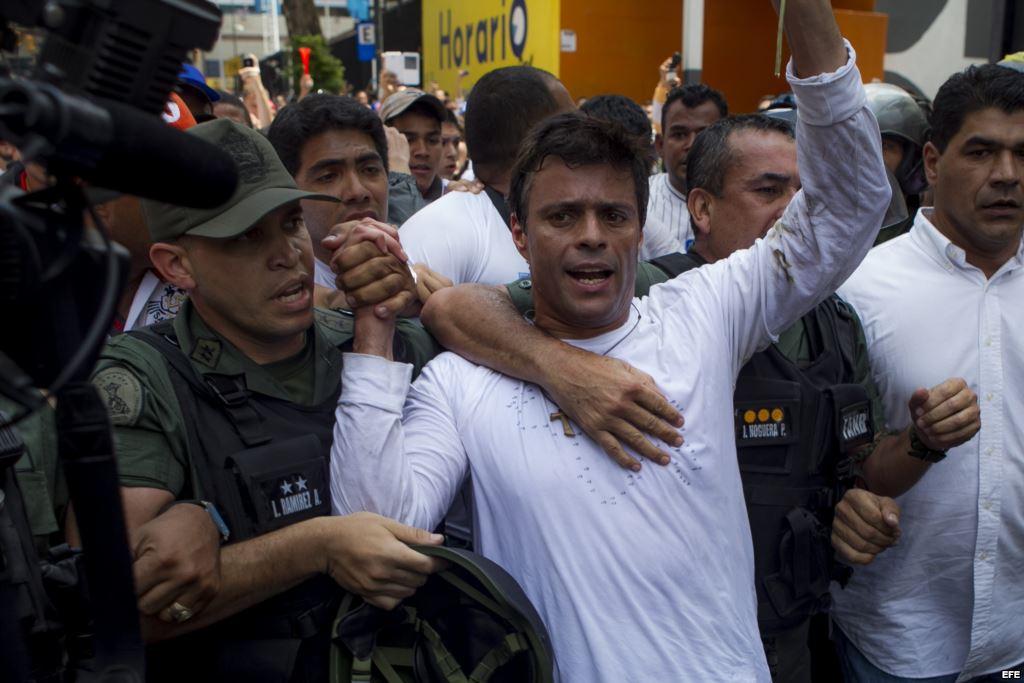 Leopold Lopez giving himself up for arrest in Caracas

The name of Albert Einstein was considered for a time to be synonymous with academic failure; Thomas Edison too, who studied for only two years in the formal education system; also Beny Moré, known to all Cubans as El Bárbaro del Ritmo (The Rhythm Barbarian) and who, with a lot of effort, learned to read the notes on the musical stave.

These, and other examples, tell me that I form part of that group of persons who, without scientific evidence, consider that you are born with your talent; and then later, as it should do, the education system refines your innate abilities.

In politics, in my opinion, the same thing happens, since I don’t accept the notion that a leader is developed from nothing. Leadership is the ability to communicate with a group of people, influence their feelings so that they let you lead, share the group’s ideas, stick with them, and carry out those actions or activities necessary to achieve one or more objectives.

For example, and with respect, in my country (I am referring to both the ranks of the government and the opposition) I can see heads; but not leaders. In Venezuela, it’s a different story; Leopoldo López, great great grandson of Concepción Amestoy Palacios (niece of Simón Bolívar), and of Cristóbal Mendoza (first president of Venezuela), was born with a political predisposition and with leadership in his genes.

I am not trying to put myself up as a historian, I am not, or to relate the details of why we are now fixing our attention on Caracas; but I do want to say that in a similar situation, any hysterical fool, irresponsible bigmouth, or prominent sick person could have dragged that country towards a civil war and an irreparable bloodbath. But only a political tactician is able to take a government which is powerful, arrogant and ruthless to the position of checkmate.

Calling a historic march and delivering it, Leopoldo López showed his individual vulnerability; making it evident that his defence does not depend on the much overvalued cyberspace, but on the real world, on a popular mass, above all students, who live outside of the computer screen and of the “liking” of the social networks. So much so that, after he was put in prison, we have seen a considerable increase in real people protesting on the streets of Caracas.

The president Nicolás Maduro, is on the point of getting burnt by the hot potato in his hands. He knows that if he sets López free, he runs the risk of demoralisation, and the feared result of loss of control; but if he leaves him in jail, and the protests continue, the danger could be even greater.

Calling for dialogue was an important and very helpful decision by the Bolivarian bus driver, who, for the moment, counts on the support of the armed forces and institutional power; but now the opposition possesses the switch which can ignite the extremely powerful and explosive popular bomb.

The official forces stomp on the thousands of young people in the streets, who are not afraid and appear to shower themselves with Red Bull. I think that we have come to the moment for sitting down and discussing everything. The freeing of Leopoldo López, the unification of a divided country, the urgent recovery of a people … and including a negotiated exit for Maduro.

This time Venezuela will win, thanks to the opportune action of a wise and intelligent leader.