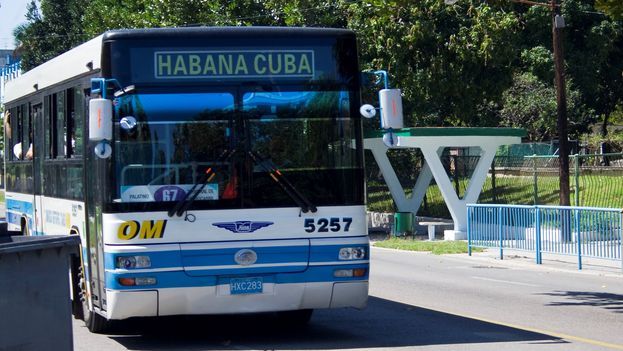 Route 67 is what we in Cuba call a ghost bus. But for the inhabitants of the popular La Timba neighborhood in Havana, it’s the only public transport that leads to the city center and the historic old town. La Timbans know when it runs and even commit to memory the names of the drivers. Osvaldo is one of them and displays his National Vanguard status for his dedication to the art of driving.

In the eighties there were several routes serving this poor Havana neighborhood. During the Special Period the Ministry of Transport reorganized the service and cancelled many of them. The No. 67 remained as the only survivor. In runs from the Palatino area and usually operates with one bus on a two-hour schedule. The first bus leaves at 6:20 in the morning, taking early morning workers to their destinations. On days that are a true miracle, there are two buses which run every hour.

Some older people, to avoid having to walk with their heavy bags, wait for the single bus to travel just one or two stops. They are few and belong to a brotherhood that knows the schedule by heart. A kind of “No. 67 Club” made up mostly of the elderly who recall the glory days of their favorite bus.

Sometimes a member of the club will warn another not to wait because the bus is broken down and not running. They have contacts and use them, to find out if it already left the stop, if the driver is sick and couldn’t come to work, or if there is some technical problem that has left it back at the repair shop. In addition to their loyalty to the No. 67, they are characterized by optimism, trusting that, in the end, the bus will appear coming around the corner, with a slight sound of the horn as the doors open in front of the patient passengers.

Their fan enthusiasm even manifests itself in some outsized jealousy toward the Route 27. Originating from the same stop, this latter has been assigned additional reinforcements, evident in a larger number of buses. An indignant passenger asked about this disparity and the annoyed driver responded, “It’s that we are Palatino’s poor daughter,” and “we don’t collect as much as the No. 27, so we don’t get priority.”

The passionate users don’t understand how it is possible that the social function represented by their preferred route is not valued. Nor how in these instances the case is considered only from the economic point of view. They don’t understand because, for them, this route is part of the life of their community. It’s a piece of their environment. The No. 67, as they call it, is an essential part of the urban culture of La Timba.