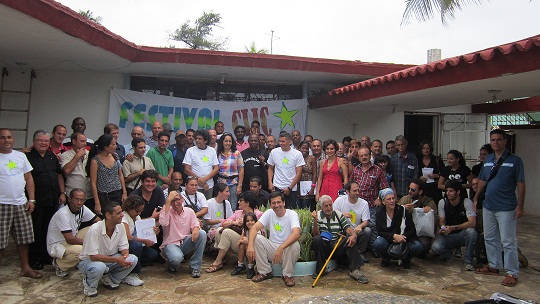 For three days, from June 21 to 23, an event organized by civil society on technology, social networking and the Internet was held in Havana. Called the CLICK Festival, this event was the realization of a long-cherished dream among citizens who, from the Island, are using social networks and the web as a path to civic and professional expression, as well as for purely personal reasons.

Bit by bit the technology is making its way into a society marked by the lowest cellphone use and least access to the vast World Wide Web. According to the latest official statistics, in a population of over 11 million people only 2.6 million users are “online,” a large percentage of whom has access only to an intranet of controlled and reduced content. Hence, among the popular demands felt most strongly throughout the country is a desire by Cubans for massive access to cyberspace.

More than a year after the fiber optic cable from La Guaira, Venezuela to Santiago de Cuba was installed, the true state of this very costly tendon is still unknown. With a price of 70 million for its purchase and installation, the cable brought with it high expectations for improved accessibility and telecommunications. According to experts, if it were to operate at full capacity it could multiply by three thousand times the current connectivity of the largest of the Antilles. However, the deepest official secrecy has remained over whether the fibers are already transmitting kilobytes.

Even so, the famous cable was one of the themes most present in the discussions of the CLICK Festival. In the three days of panels and workshops, many voices raised the question of when it will be possible to contract for a service to surf the web from one’s own home, legally and without political limitations.

One of the hallmarks of the discussions at the festival was their openness to all kinds of opinions. The announcement issued by the principal organizers stressed that the character of the event would be “inclusive, plural, without segregation.” Significantly different from the precepts of previous events in Cuba, which preferred to define themselves more in line with “bloggers for the Revolution,” or to consider the Internet as an ideological battleground.

The great reach of the CLICK Festival lay in not defining itself in those terms, but rather in being disposed to accommodate every kind of opinion and trend. Even the invitation specified that no “final statement insulting or discrediting anyone” would be drafted. A necessary declaration given the tendency to conclude such events with an ideological reaffirmation, as has been the case with other meetings on social networks and blogs.

The festival announcement spoke in purely technological terms, and thousands of invitations were sent to official websites, institutional bloggers, and even Twitter accounts that have systematically attacked alternative voices. As “at the table of the poet Walt Whitman, everyone is welcome here” read a little pamphlet that circulated days before the opening of the event.

But the official response was swift. A day before the CLICK Festival began, the site Cubadebate attacked with an editorial that had all the appearance of a threat. They called the event “a subversive monster” and linked it to the old hobgoblins of official propaganda: “the CIA, the Pentagon and the United States.” Anyone in their right mind would have canceled the CLICK Festival for fear of reprisals and attacks on the site, but as everyone who has spent too much time in front of a screen tends to have “a screw loose,” the organizers decided to continue with everything as planned.

So on June 21 at 9:00 in the morning, in a Havana battered by rain, the first session began. Among the key presenters was José Luis Antúnez who was part of the organizing committee for the Spain Blogs Event (EBE), Antonio Rodiles who leads the project Estado de Sats, and Yoani Sanchez, this writer, who heads the Cuban Blogger Academy.

The fear triggered by the harsh criticism leveled from official sites against the Festival influenced the number of attendees. That was probably the objective of the aggressive editorial: to dissuade many from even coming to the site. However, during the three days of the event, about two hundred people attended either as panelists or audience. Given the fear unleashed by any attack of this kind — launched from the government — the number of participants was surprisingly high. In the words of @npimienta89 — one of the young twitterers who dared to come despite the official demonization — the reality was far from the claims of Cubadebate.

“I came to see for myself and I have not seen the horror film that they announced,” he confirmed in his Twitter feed. Phrases like this arose throughout the event, while some observers, initially skeptical, witnessed that the discussion really was about technology and the Internet. Amid the extreme polarization on ideological issues that exists in Cuban society, the broad scope of the Festival remained focused on social networks and cyberspace.

There were eight panels including the presentation and explanation of the program, plus a movie night discussion dedicated to the documentary “How Did Facebook Change the Arab world?” Among the topics addressed was the immediacy and brevity of Twitter, adapted of course to the Cuban context and the peculiar ways in which citizens manage to publish on this microblogging service.

Looking to the future, one of the chats was dedicated to thinking about the first points for a possible bill of rights for Cuban internauts, moderated in this case by the lawyers Laritza Diversent and Yaremis Flores, along with the blogger Regina Coyula. There was also time for technical issues… pure and simple. Such was the case with the workshop let by @jlantunez about how to publish on the content manager WordPress. Abstraction also had its moment, raised in the topic “Social Complexity and New Technologies,” which sparked an extremely intense debate.

During the last day there was a technology space dedicated to children, where these little ones could try out an iPad for the first time, as well as a PC and an iPhone. This session offered the most beautiful scenes, with visions of the future from the entire CLICK Festival.

On the same days as this festival of technology, the government organized its own Festival of Knowledge. According to official TV, more than one hundred thousand Cubans throughout the country participated in this event. Asked about it, those participating the alternative festival said they were pleased to have prompted such a hasty official response. “If the wall of disinformation that we want to tear down ends up being moved by those who support it, then we are satisfied,” as one participant said.

So amid the steady drizzle that fell on the city, Havanans had the opportunity to talk about Twitter’s little blue bird, socializing on Facebook, and even this gadget called a cellphone that is spreading little by little over the Island.

Three days to “think about technology, project it, make it our own,” as the CLICK Festival motto said, and so we did. The kilobytes came out a winner, the extremists lost.