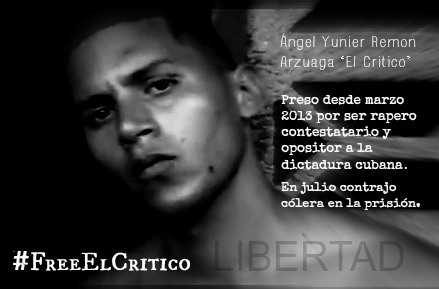 Ángel Yunier Remon Arzuaga ’El Critico.’ Jailed since March 2013 for being a non-conformist rapper and an opponent of the Cuban dictatorship. In July he contracted cholera in prison.

Jailed since March 2013 for being a non-conformist rapper and an opponent of the Cuban dictatorship. In July he contracted cholera in prison.

The chain of suffering continues for Cuban opponents. Now adding to the injustice committed, among many of the dictatorship, against the artist and human rights advocate Ángel Remon Yunier Arzuaga, who was hospitalized in intensive care and reported to be in critical condition having gone on hunger strike.

He has been imprisoned since 26 March of this year, after the fascist hordes who obey the totalitarian regime of the Castro brothers, undertook in an act of repudiation in front of his house. In addition to being a victim of government provocation, as a great irony of the dictatorship and that we can never get used to, he was accused of “attacking,” and so the prosecution requested eight years of imprisonment.

Since his arrival in prison, he has suffered the hostility of his repressors, those who dealt out to him multiple beatings, and he was infected with cholera.

It’s no secret that Ángel Yunier Remón Arzuaga’s crime, like that of all of us opponents who are in prison, is to confront the system, which for a long time, if it ever was, stopped being communist or left leaning politically, and only responds to the desire for power of Fidel and Raul Castro in their State without rights.

Yunier Angel belongs to the duo “The Children Nobody Wanted” — to my honor* — and if that wasn’t enough, with the suggestive name of “The Critic,” together with Yudier Blanco Pacheco. The lyrics of their songs are hymns among youth, making an impression with immediacy and profundity on Cuban youth who then learn and repeat the verses. Through their voices they feel that they also reclaim that which belongs to them by right: freedom.

His real and unforgivable offense, in the eyes of the political police, is to think differently, and expose this through his art. State Security sought to stop his rise in the Cuban culture.

Taking from experience the awesome rise of Los Aldeanos (The Villagers) and the phenomenon it immediately caused among the youth. Guided by a sense of support towards this young artist, I am obliged to announce that if the worst is to happen to this activist for the rights and freedom, from the place where I am detained, I will start an indefinite hunger strike.

May God be with Remon Yunier Angel Arzuaga, may He protect him in the name of his baby of nine months, his wife, and all the Cubans with shame and good feelings that accompany him in prayer.

The dictatorship is responsible for his life. The die is cast.

*Translator’s note: “The Children Nobody Wanted” is the title of a book by Angel and also the title of his blog.