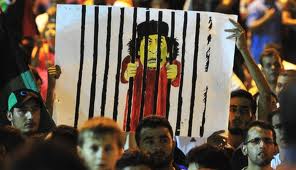 Yesterday I didn’t leave my house. The morning news on Radio Reloj (Clock Radio), didn’t even have old news about Libya. I couldn’t watch the midday news because the power was out. At eight at night on National Television News there were only the headlines after the 50th anniversary of the Cuban Women’s Federation (FMC) and the threat of a cyclone.

– Doubts about the capture of the dictator’s sons.

– Concern for the journalists of the Voltaire Network who exposed the Atlantic Alliance massacres and who are threatened with death.

– A young man was kissing the American flag.

– The rebel troops were unable to find the whereabouts of Gadaffi.

– The opinion of the Venezuelan president about the situation in the North African country.

– Gadaffi had spoken by telephone with Ilyumzhinov, president of World Chess Federation and the Republic of Kalmykia.

This morning, Radio Reloj, which, together with the newspaper Granma and National Television News, General Gadaffi should promote to the Generals of his troops, was proclaiming that the dystopian clown should convert Libya into a volcano against foreign invasion, and denounced the rebels hidden in houses of the residents of Tripoli.

This reminded me of the joke about Granma (the original joke was about the newspaper Pravda), that if Napoleon had had this paper, the world never would have heard of his defeat at Waterloo.

It also reminds me of something less festive and more recent: Those jingoistic statements by many compatriots urging Saddam Hussein to fight to the death before being poignantly captured. Live and learn.