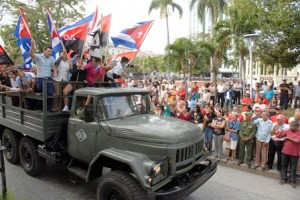 While the Chinese calendars proclaim 2010 as the Lunar Year centered on the dragon, the Cuban news reported on Sunday, January 8, images of the Liberation Caravan from that long ago 1959.

As if it hadn’t happened half a century ago, broadcasters and camera operators worked to synchronize the euphoria of the past with the elderly and women in some parts of the central highway gathered in turn around malts and soft drinks to recall the event.

The sorry spectacle speaks of the fleeing morals of those characters degraded after they came to power. The rational lucidity of trafficking in misery to attract hundreds of people to the places where Commander-in Chief passed, and is a ritual that hardly fools anyone.

This happens because in Cuba the mass media remain wedded to the past, the past as a source of legitimacy and a foreboding mirror of power. If something remains of that Revolutionary entelechy it is the protagonists of the hard-core of the process that twisted its way into the arms of the defunct Soviet Union.

Half a century later Cuba is the crepuscular laboratory of Latin America. Maybe that’s why young people dream of emigrating to the north, while the official press is throwing out the symbols of the past and the old men of the State Council are doing business with foreign millionaires and prepare their offspring to take over, as with Kim in North Korea.

If one of those tourists who portray the ruins of Havana asked about the achievements of the Revolution, we would have to tell them some allegorical jokes of the hell and sad statistics. Here are some.

Since no one flees from freedom this Liberation Caravan generates expectations that end in frustration. Why then celebrate the success of our mandarins? Is it a way of rewarding the toothless old men who generate lines to buy malts and soft drinks on 8 January of each year?