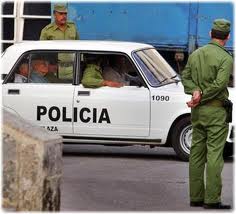 At 2:00 PM on November 22, 2012, I was interviewed at the People’s Revolutionary Police (PNR) Capri Station, located in the Arroyo Naranjo municipality of Havana, with the Lieutenant called “Junior” from Department 21 (the State Security department that deals with dissidents).

The interview began after 20 minutes since he could not find a place to hold it:

Official: (He introduced himself as a Department of State Security (DSE) official but did not show identification, and began)

What has motivated you to do these types of things? I believe it’s probably due to something that happened in your past, such as losing in sports, or due to the time you were assaulted and not fairly treated.

Interviewee: That was in the past, it no longer interests me.

Official: How did you find out about the course in journalism from the United States Interests Section (SINA)?

Interviewee: Well, I don’t remember well, but I think that since 2009 I was in CAPF (Commission of Attention to Prisoners and Relatives), and visiting the embassy I found out about the course.

Official: I did not know that you were from CAPF, why do you write blogs? referring to everything published that is true and not invented.

The official continues to ask me why I’m writing blogs because it is not in line with my character. You have nothing in common with those people, you are a professional, he says.

Interviewee: I’m not the only professional, Miriam Celaya, Yoani Sánchez, Reinaldo Escobar, and many others.

Official: Yes, but there are only a few.

Interviewee: That’s what you say.

Official: Tell me what you intend to change with what you are doing?

Interviewee: Everything that’s wrong. Explain to me why is Estaban Lazo in charge after he had the problem with the pig farm in Oriente.”Nothing happened because the people  were not made aware of the situation and instead of being ousted, he was promoted”. You profess that children in Cuba do not go hungry and if you go to Lumumba there are children there who go to bed with bread in their stomachs but don’t have shoes to wear to school. If this is a free country why is there no freedom of expression?

Official: Well, freedom of expression is relative all around the world. If you watch the news you see protesters suppressed with tear gas and beatings. Here we don’t do that.

Interviewee: So why was Rodiles kicked on the floor?

Official: In reality it did not happen that way. Rodiles resisted arrest.

Interviewee: But that did not warrant being brutally beaten.

Official: What happens is that sometimes, due to insufficient police training, some errors are made. That’s why we are always there to make sure nothing happens. However, department 21 does not look after people like Rodiles, it is department 3.

Interviewee: Then you don’t need to look after me.

Official: Yes, you are from CAPF

Well, now you know what I think. Tell me, what motivates you to be an official?

Interviewee: So you are the one that takes care of me.

Official: Yes, since you graduated from the course on journalism.

Interviewee: Then if something happens, I’ll come to look for you.

Official: Yes, you tell them to find the Official Junior from 21 and that’s it. Keep in mind that how the situation evolves depends on you. We are here to maintain a dialogue, not to confront. That depends on you. I don’t wish to call you some day to say, look, what you published here is a lie because I saw that person, “this, this, and this are lies”.

Interviewee: Look, the first time that I was taken prisoner to the Unidad jail in Lisa (Havana municipality), I was interviewed by a young lieutenant like you whose name was Marcos, and he said I was making fun of him, and that he was going to hit me. What would have happened if he had hit me?

Official: You would have been in a fight.

Interviewee: No, if I defend myself by hitting him in the head with the chair, what would have happened given that I did not start the fight? “They would have accused me of disobeying the authorities and other things.” Who would have lost? Me.

Official: Stop, I hope that when I send you a citation, you’ll come.

Interviewee: No, I hope this is the last encounter, why come back to you now that you know what I think.

Official: We need to continue to meet because we must talk about other things, and also one day I’ll tell you not to go to Estado de Sats — to make an example of you, if you go I’ll put you in prison. “I hope that when we talk man to man you’ll have the decency to do what I say.”

Interviewee: Well, if you know that Yoani works for the CIA why don’t you jail her?  What’s published in the newspapers and broadcast on television must be lies since you don’t arrest her, only a way to defame her so that people stay away from her.

Official: I don’t like to talk about people when they are not present, but Yoani is a mercenery. If you don’t know what that means, it means “people who are paid to serve the interest of a foreign country.”

Interviewee: Well in regard to the citations, send them personally to me, don’t go through my mother. If you do, I will not come. That’s personal.

Official: The reason is that you need to be at home but yet you stay elsewhere.

Interviewee: I have rights, don’t I?

Official: Tell me the number of your house.

Interviewee: I don’t remember the number. There are three houses with the same address.

Official: Which is it? The first, second, or third?

Interviewee: The second one

Official: The one with hibiscus on the fence.

Interviewee: All the fences there have hibiscus.

Official: Then what’s the color of the house.

Official: Is it the only one of the three that’s yellow?

Official: The name of your girlfriend I think is a name of an older person: Caridad, María, Carmen. I have it written with the first surname, I don’t have her last surname, so that I can look for her address and give you the citation personally.

Interviewee: Caridad is her name. Last surname is Torres.

After two hours of conversation he told me I could go.