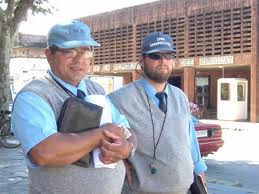 They added State inspectors for the licensing review of the taxi drivers on the Palma-Vedado route and they collect the inspected cars on L Street between 23rd and 21st alongside the ice cream parlor Coppelia.

It was 10:00 PM on Saturday and the citizens who wanted to go home formed a big group of people who spanned L Street between 23 and 21 and it was impossible for others to walk by.

Luis Enrique González, a young man of 24, said, “While there are these 6 inspectors here the cars won’t stop and those that do stop they grab them to inspect them.” There were more than 10 cars detained in the street without being able to offer their services and losing money to those who had problems with their paperwork, said one of the affected taxi drivers, Alberto López, 47.

“They asked me for money,” said López, “they told me to give them 10 convertible pesos and they wouldn’t bother me for the rest of the night,” said López, angrily.

With taxes, gasoline, the car when it is broken and the corrupt inspectors, you don’t realize, “We work to line the pockets these hard noses,” said Michel Rodriguez a 37-year-old taxi driver.

The inspection lasted almost until dawn, when the self-employed (taxi drivers) abandoned their routes because of the few people out at that hour.