Cubanet, Miriam Celaya, Havana, 16 November 2019 — The Cuban capital is preparing to celebrate its half millennium, and although it is obvious that this November 16th many of the construction plans will be unfinished, numerous building facades on the main avenues will not be painted (as had been planned) nor will all the details for the restoration of the National Capitol — the undisputed star of the party — be 100% completed, the grandstand at the foot of the majestic staircase is being prepared for the solemn act and for the speeches of the occasion.

“Havana is real and it’s wonderful,” has been the kind of mantra throughout the year behind which authorities have struggled to exalt and recover only the relevant and original beauties of the most iconic buildings in the old city.

For foreign and national visitors who don’t know Havana, the vision of one of the most scenic spaces of the city will seem like a marvel: the profusely lit Paseo del Prado and the beautiful buildings from the republican era adjacent to the majestic Capitol, Parque Central and Parque de la Fraternidad flanking the ends of the future seat of Parliament. From that spacious and majestic setting, the belt of poverty that runs nearby is invisible: the dirt of misery will have been swept under the rug.

However, one would only need to walk around in daylight through the adjoining neighborhoods to discover the real Havana, abandoned to its own fate, that which, in official documents and institutions, is standardized under the label of “housing stock” or “domestic sector” and that  ̶  judging by the neglect and ruin — seems to suggest a perverse government policy: to ensure that in the short and medium term the dilapidated buildings end up collapsing or having to evict their residents by force, leaving  those spaces available for tourism and investment opportunities, which the old part of the capital and its popular neighborhoods are becoming, in a kind of theme park for the enjoyment of foreign visitors.

It is really notorious that none of the many multifamily buildings in Old Havana and Centro Habana have been favored by the restorations. In fact, the run-down houses of the early twentieth century turned slums, which are the most abundant and typical buildings in the area, have not even had the benefit of a measly paint job.

In the midst of the general deterioration, there are only rescue and reconstruction plans for buildings of State interest. The Campoamor Theater is among them, located behind the Capitol at the corner of Industrias and San José streets, with only its curved facade preserved, for whose restoration an important investment project exists. Currently, it is surrounded by a fence that displays photographs of celebrities who once performed on its stage: an unequivocal sign that it will be rescued.

However, a few steps away from it, on Industrias Street itself, corner of Barcelona, there is an old multi-family building, peculiar because it’s the site of the installation of the first Otis elevator. Several families are crammed in the space, under threat of a possible collapse, since the property’s construction has suffered major deterioration. 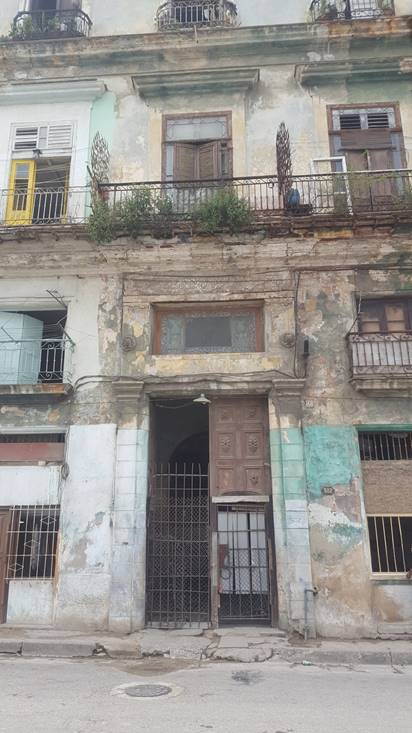 In this building, behind the Capitol, the first Otis elevator for residential buildings was installed in Havana. (Author’s photo)

Some old hotels in the capital also became residential buildings years ago and are now in a dire state, precariously supported by wooden struts and in imminent danger of collapse. It is, to cite an example, the case of the nearby hotel Perla de Cuba (Amistad and Dragones streets), where families still live in the lower floors, as can be seen in the photographs.

For greater uncertainty of those who inhabit these dilapidated spaces, a significant part of them are in legal limbo due to their status as “illegal,” since they have come from the interior provinces and have not been able to change the status of their residence in the capital. Decree 217 functions as a kind of “green card,” legitimizing a humiliating segregation among the nationals of this Island.

In these cases, not only is their helplessness reinforced  ̶  since they can be deported at any time to their places of origin using police force against them ̶    but their inability to repair their homes legally, since on one hand they do not have access to building licenses or financial credit, while on the other, these buildings are mostly declared as “uninhabitable, non-repairable” by the Housing Institute, which eliminates any legalization process.

For their part, the “privileged” who are native to the capital or have obtained the grace of legal residence, although they might risk repairs of a cosmetic nature often lack sufficient capital to undertake structural improvements, which are extremely expensive and require state intervention.

A circle that closes and seems to be sealing the fate of thousands of families that, 500 years after Havana was founded, do not have much to celebrate. The gap between the beautiful and the ruins, the political power and the “governed,” the poor and the rich, the ordinary Cubans and the privileged elite continues to widen. The benefits of the imaginary “socialist model” have turned out to be increasingly bogus and unrealizable.