14ymedio, Luz Escobar, Havana, December 7, 2018 — The Government has pressured private shared-taxi* drivers in Havana not to join a transport strike this Friday in protest of measures that seek to regulate the self-employed sector. The police have threatened to confiscate the vehicles of those drivers who don’t go out to work.

The tension increased among the boteros (literally ‘boatmen’ as private shared-taxi drivers are called) in recent weeks as it was getting close to December 7, when the set of policies begins to take effect. The rules regulate aspects like the purchase of fuel, the routes, and the handling of money, with the requirement to have a bank account in the country.

The uneasiness of the drivers in face of these controls has led them to push various protest initiatives. One of them has been a call to a strike, popularly called El Trancón — “The Great Traffic Jam” — which has been spread among private taxi drivers in Havana and other provinces in the country, to begin this Friday. 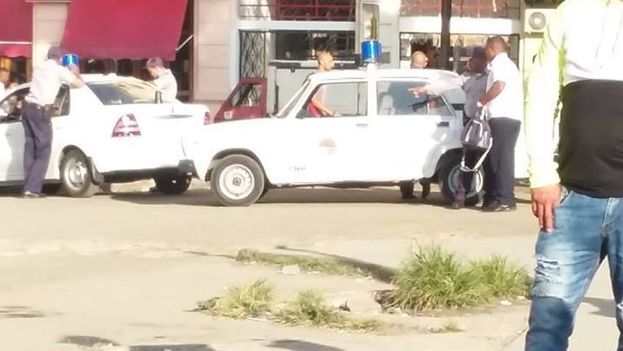 The government has responded by visiting the leaders of the initiative, arresting some, and threatening the boteros with legal repercussions if they join the strike. Rafael Alba, driver of an almendrón** (pre-1959 era car), who works transporting passengers in Havana, spent almost 24 hours detained in a police station for that reason.

“They told me that if it occurred to me not to go out to work this Friday, they would confiscate my car,” he tells 14ymedio. Alba was interrogated during his arrest about the origin of the call to “The Great Traffic Jam,” with which the drivers are demanding freedom of movement, right to work in the entire country, access to a wholesale market, ability to import parts, and permission to have independent unions, among other demands.

“Now I have a police car in front of my house to check if I go out to work or not,” claims the driver, whose family depends financially on his work. A vehicle like his, made in the 1950s and with successive repairs and adaptations, is valued on the informal market at about 40,000 CUC (roughly $40,000 USD).

Since Thursday morning police operations were notable at the taxi ranks where these drivers regularly come together and along the routes that they travel most frequently. “The city is full of police and guards dressed in civilian clothing controlling all the almendrones that are driving around empty and don’t stop,” a resident of San Miguel del Padrón tells this newspaper. In the downtown park El Curita, in Central Havana, since yesterday afternoon, the presence of police cars and officials was notable, as were State Security agents.

Another driver, Ramón, 56, who works on the route between La Víbora and El Vedado, also fears losing his old Ford with seats to transport nine people on each trip. “This Thursday various inspectors came to the vicinity of the Mónaco cinema to warn us that they were going to take measures against those of us who join the strike.”

“They have put all kinds of pressures on us, and they have also promised us that in the next few weeks they will relax the rules a little, but the people don’t believe them because once the measures go into effect, what guarantee do we have that they are going to be thrown out?” questions the driver.

The popular unease led the incumbent of the Ministry of Transport to appear on Thursday evening on the official TV Roundtable program,along with other functionaries from the sector. Adel Yzquierdo Rodríguez avoided referring to the strike of private boteros and dedicated the greater part of his appearance to speaking about the presumptive measures that are approaching for national transport.

Yzquierdo Rodríguez assured that before the year ends, 400 12-seater microbuses will arrive on the island and 90 buses that will add to passenger transport. The official also assured that 80 buses that were in a poor state have been repaired in the capital.

National transport is going through a profound crisis that began after the collapse of the Soviet Union, at the end of the last century, but has had moments of improvement like the years in which the government of Hugo Chávez sent around 110,000 barrels of petroleum to the Island each day, a part of which were destined for resale on the international market.

With the hardships that the Cuban economy is currently going through, one of the first signs of deterioration has been the elimination of public transport routes, the reduction in the number of available buses, and the continuous breakdowns due to lack of spare parts.

Private drivers have taken advantage of the void left by the state system and currently are an essential sector for moving Cubans from one place to another on any part of the Island. From horse-drawn carriages, to the old pre-Revolution almendrones of the last century, to the more modern and climate-controlled vehicles, self-employed taxis are vital for the Island not to become paralyzed.

However, the minister of Transport detailed that in the first obligatory inspection that these vehicles were submitted to all over the country to obtain the technical circulation certification, only 32% of the cars inspected passed, although currently that figure has risen to 62%.

The vice minister of Transport, Marta Oramas, added that until the end of November 2,167 licenses had been taken away from private taxi drivers because of the bad conditions of their cars, out of a total of 6,119 private title-holders.

During the Roundtable broadcast none of the invited officials advanced the possibility of softening the regulations of the set of policies or of a possible moratorium. Nor did they permit a representative from the private sector to speak.

*The vehicles operate in fixed-route shared service, picking up and dropping off passengers who stand along the route and flag them down.

**The word “almendrón” refers to the ’almond’ shape of the classic American cars commonly used in this service.

The 14ymedio team is committed to serious journalism that reflects the reality of deep Cuba. Thank you for accompanying us on this long road. We invite you to continue supporting us, but this time by becoming a member of 14ymedio. Together we can continue transforming journalism in Cuba.