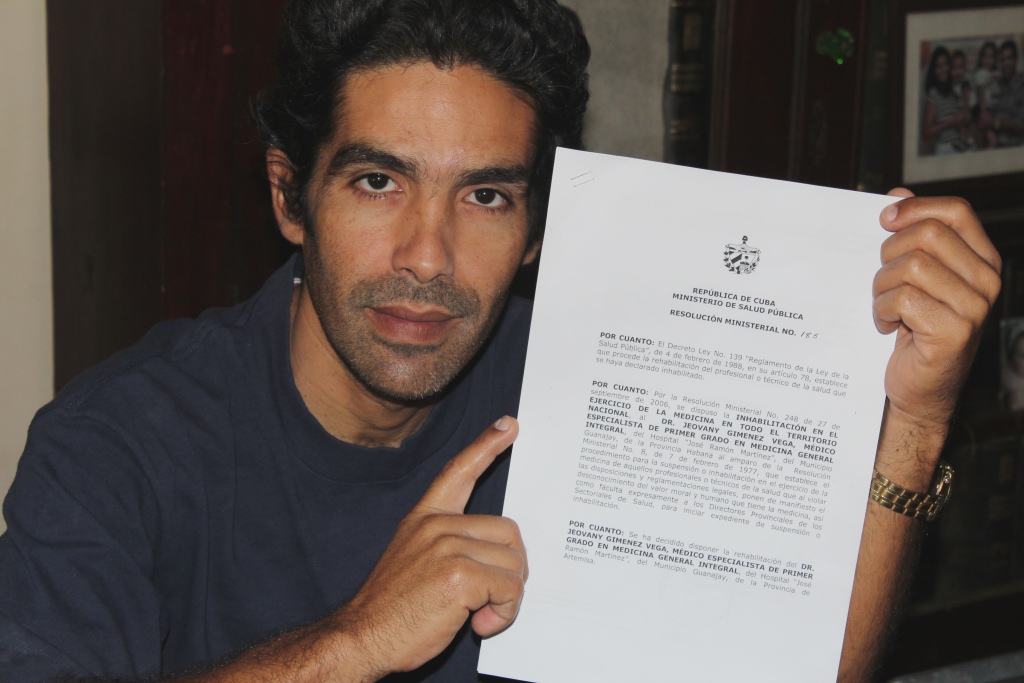 Due to the well-known inability of Cubans to connect to the Internet at will — and because I didn’t feel I was in a condition during the first week of April to travel to Havana — it is only today that I can update my page. In the end, it turns out, censorship reaped its fruits and I was unable to report each story in real time as the situation demanded. But better late than never and here I describe the last days of my hunger strike, which lasted from March 5th to 31st, although its end was announced officially on April 1, once I had in my hands Ministerial Resolution 185.

The last week of the strike started with a distinctive sign: the absolute silence maintained for 21 days by the Cuban government authorities and the Ministry of Public Health (MINSAP) with regards to my case and the state of my health — already by that time widely known publicly — and it would do nothing but get worse over the following days.

I decided, then, on March 26th, that I would report in person to MINSAP headquarters the following day to request an interview with the Minister, which I announced on Twitter and by way of phone calls to several international news media accredited in Havana and to the newspaper Granma, the Official Organ of the Cuban Communist Party, as well as several independent journalists and bloggers in Havana. I intended, at that time, to also attend the Mass to be held in Havana where Pope Benedict XVI would officiate, on Wednesday, March 28, which I also announced via Twitter.

None of this came to pass because on Monday, March 27th, on leaving the Catholic Church in Guanajay where I was sleeping, I was forced into an ambulance from MININT Medical Services, in custody of a State Security agent, and in the presence of the MININT Chief of Medical Services for Artemisa Province, and was taken to a rest house on the outskirts of the neighboring municipality of Caimito, where I was held against my will through that day and until the evening of Wednesday the 28th.

Once the airplane taking Benedicto XVI back to Rome took off, I was “freed” in the Emergency Room of “Ciro Redondo” Hospital in Artemisa. During the entire time in which State Security held me in custody, never — neither in this nor in any other previous attempts — did they exercise any kind of physical violence against me. They treated me with courtesy, offered me food, which I always refused, and allowed my wife and my mother to stay with me whenever they wanted during the entire time. Of course, I was held against my will and they took my cellphone, so I was disconnected for a day and a half from the outside world.

On the evening of Wednesday the 28th, after being rehydrated via IV in Artemis Hospital, I returned by my own means to Guanajay, where I spent the night, but at noon on Thursday the 29th, feeling the weight of the fast and my body at the point of collapse, persuaded by Dr. Rodolfo and my wife, I moved to Artemis Hospital, where I was admitted to the Emergency Room and rehydrated again, and where they performed additional tests and observed the severe ketosis of fasting. During the early hours of Friday 30, a drop in urine output caused fear of acute renal failure, but it went no further because once my state of hydration improved, diuresis returned to normal.

On the evening of Saturday 31, at 26 days of fasting, MINSAP finally broke its silence: in the afternoon senior officials from the Ministry appeared in the emergency room and informed me that the Minister of Health had reinstated both of us and that I would be allowed to finish the Specialty in Internal Medicine as I had demanded.

Given this reliable guarantee, I decided to start drinking juices from that moment, which I immediately reported on Twitter. On the morning of Sunday April 1, with my metabolic state stabilized and longing for the company of my children — extremely stressed by my absence — I decide to go home, where I was visited in the afternoon by the officials of the Ministry of Public Health, who handed me a copy of Ministerial Resolution 185 issued on 31 March by the Minister, Dr. Robert T. Morales Ojeda, reinstating me to the practice of medicine throughout the country, which was also released via Twitter. The news was immediately broadcast by the alternative blogosphere in Havana and many people from many places were glad to hear the details of the story. Other tweets posted a few minutes later announced that I had officially ended, from that moment, my hunger strike.

In addition we were paid in full the remuneration lost during the entire time we were disqualified (66 months) for the last quarter of 2006, from 2007 to 2011, and the first quarter of 2012; in addition, in my case, on confirming that in 2006 I concluded my Residency without problems, this balance was paid me on the salary scale according to the Internal Medicine Specialist and Specialist in General Medicine, which was my salary at the time of being disqualified.

We also were allowed to choose where we wanted to be located: we both responded in Guanajay, and then they told us we could start working, after a 2 or 3 week rotation with a doctor in the area, in the “Jose R. Martinez” Hospital in that town, where we had worked at the time we were disqualified. That day they also ratified the decision that I be permitted to resume the study of my specialty in Internal Medicine in its third year, with the term to begin in September in the coming course.

Meanwhile, Dr. Alfredo Felipe Valdés, my colleague and friend, in exile in Spain, days earlier had updated me about the pending negotiations with respect to his professional title — the release of his paperwork from Cuba — which was my third demand. He informed me that the document was in Madrid and that it was now in the hands of the authorities of that country. According to the established procedure for such cases, it will take a few more months to resolve, but the Cuban side has met its responsibility.

Once the storm has passed and while I endeavor to recover as quickly as possible the 26 pounds lost in the war, it’s time to recap and reflect on what happened — because this is something that deserves its own post — to which from today, dear friends, you are invited.