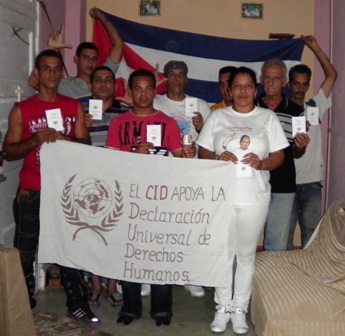 Delegation of the CID in the 10 de Octubre municipality, honoring Laura Pollan on Human Rights Day

The Cuba Independent and Democratic Party (CID) in the municipality on October 10, paid tribute to Laura Pollan, at 6:00 pm on December 10 at the home of Aimé Cabrales Aguilar, located in the Fonts Street # 143 (interior) between 11 Beales in the Lawton neighborhood, under police surveillance.

The homage included a recitation of the thirty points of the Universal Declaration of Human Rights by the audience, they rose in prayers for the eternal rest of the late founder of the Ladies in White movement Laura Pollan, they dedicated a bouquet of flowers and lit a candle to her memory, condemned the crackdown unleashed nationally, on this date, against the internal opposition movement and acts of repudiation against the headquarters of the Ladies in White.

At the commemorative event Maikel Jose Suarez Rivero was received as a member of the municipal delegation; he said he would fight in the struggle to demand the rights of all Cubans. “I am grateful that I have been accepted into the ranks of the Independent and Democratic Cuba Party on a significant day, especially when it is dedicated to honor the woman famous for Cuba and the world, Laura Pollan,” he concluded.