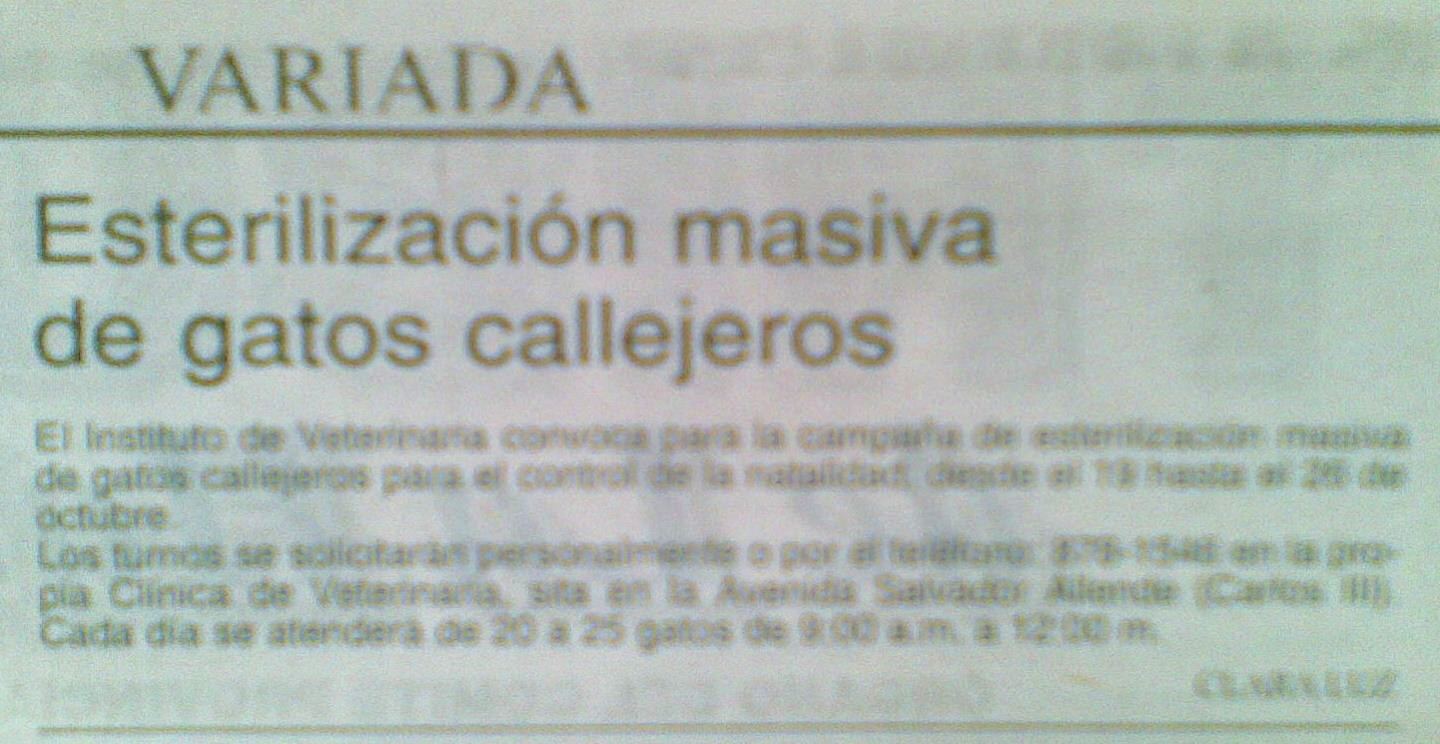 This Sunday, September 30th, the newspaperTribuna de la Habana, the “official publication of the provincial party committee,” printed a small notice on the second page that got me thinking. I took a photo with my cell phone and, due to the poor quality of the image, have transcribed this senseless article as follows:

Appointments can be scheduled by calling 878-1546, or in person at the Veterinary Clinic itself, located on Salvador Allende Avenue (Carlos III Avenue). Twenty to twenty-five cats is [sic] treated every day from 9:00 AM until 12:00 noon.

If the felines they are thinking of sterilizing are strays, why announce a campaign? Do they think the cats will cometo be operated onof their own accord in order to enjoy the surgical benefits of family planning?

The kitties without a doubt are grateful with the telephone number to call in an organized way and ask for appointments, but surely they rather leave those mental hygiene test to the humans — already accustomed to waiting in lines — while they scale to more elevated and traditional ways of lovely expression and preservation of the species. Perhaps — as the male chauvinist they are — they are thinking in leaving that “little matter” to the females of their kind, as they probably fear that since the article’s author was a woman, there is a gender problem and also there is some female bureaucrat pointing with a scalpel pointing this operation straight to their gonads.

What delusional person imagined that “pussycats” would go in animal or in person to the clinic on Carlos III to undergo this trauma. If we are in fact talking about stray cats, it is logical to assume that citizens would have to round them up, as a voluntary effort, to take them to be sterilized. Or is that the intention?

“Twenty to twenty-five cats is treated” or “are treated?”

In conclusion I have this final concern: I ask myself if they have taken into account the already visible diminished population of the “rabbits of the roofs” due to the scarcity of red meat since the beginning of the Special Period. What will become of rats whose numbers and activity have increased in the urban communities when the reproduction of cats is reduced? Since the battle against the rodents has thus far failed, perhaps the objective now is that humans, greater in numbers than cats, will be the ones expected to catch the rodents who transmit disease, as the only alternative to meat. This will then, for sure, reduce the rodent population.