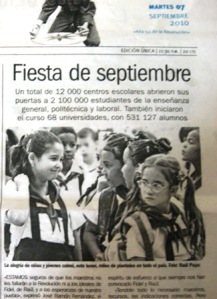 In the newspaper Juventud Rebelde (Rebel Youth) which was published on September 7th, there was a printed article titled “Party in September” which was written by Margarita Barrio Sanchez.  The photo used for the article was taken “casually” by Raul Pupo at the primary school known as Nguyen Van Troi.  In it, one can see my two twin daughters, Samantha de la Caridad Medina Martin and Samyra de la Caridad Medina Martin, who both started second grade.

In general, the article makes reference to the Pedagogical School of Fulgencio Oroz Gomez, located within the normal school of educators, and the photo was taken as a presentation note for the school next door.  It would be true to state that the expression made by Jose Ramon Fernandez, the vice-president of the ministry council of the foundation of the pedagogical school, where he states, “We are sure that our teachers will not fail to represent the revolution, nor to the ideals of Fidel, Raul, and all of the hopes of our people”, is contradictory to his previous assertion, for the pedagogical schools had been terminated with the so-called “correction of errors” process.

On August 11th, a State Security official known as Pavel, told me that they had a functionary of the Department of Minors that would attend to my daughters due to my rebellious attitude.  I told some of my friends about this and about my fear that such a threat towards my daughters would become concrete during school hours.  My mother’s intuition did not fail me, for in an act of initiation during the school year in a school where the enrollment surpasses 300 students, my daughters made it to the front page of this “maximum” newspaper, noting that the essay does not have anything to do with that specific photo.  Due to all of this and more, I am warning the democratic world about my situation and the situation of my family, and I am holding the Castro government accountable for what could happen to my young 7-year-old daughters.