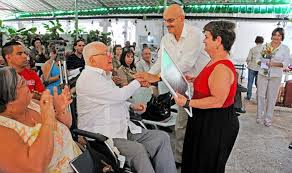 This March 12th, commemorating Cuban Press Day, the ex-head of culture, Dr Armando Hart Dávalos (who a while ago went off his rocker) offered an award to the Cuban journalists. During the solemn proceedings, Señora Magda Resik, director of Havana Radio, came out with an over-the-top, “The most important obligation for Cuban journalists is the immense task of appraising the work of Jose Martí, and it is…”

I am sorry to interrupt the sentence, which is certainly very journalistic; but I think that the obligation of the press is nothing to do with Martí, but rather it is toward the Cuban people who, thanks to the disastrous work of the press, continue to be misinformed and have cataracts in their eyes.