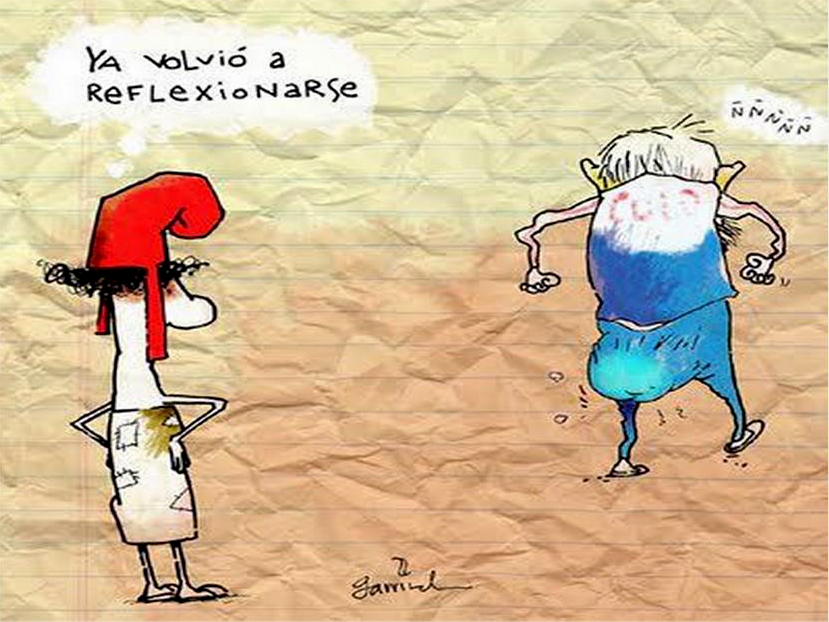 If a some genuine idolatry remains for the old, the idolater must be suffering a severe existential crisis. The lackeys with pedigree, the real ones, suffer the unspeakable when their idols are revealed as mere humans, and, in cases like this — Fidel Castro publicly exposed for 6 hours — a human grotesque.

To associate the iconographic Fidel Castro, the one that obliged Virgilio Piñera to clench his sphincter so as not to urinate in fear of at behemoth with a gun in his belt he met in 1961 with other intellectuals gone astray; to associate with this old man of bony cheekbones, emancipated jaw and eyes moving against the grain of the story, could be understood in the field of biology, but idolaters assume biology as a matter of mortals. And how to get an idea that the Supreme Leader also will become sometime a graceful old man like this, an old man who only serves to be made fun of?

The ominous symbolism this man carries does not impede us from enjoying the hilarious comedy that featured in his most recent speech at the launch of his memoirs in the Palace of Conventions in Havana.

Guerrilla of Time, is the title of this book from Katiuska Blanco, the diligent scribe destined to type these nearly thousand pages of fiction separated into two volumes. Guerrilla of Time. The satraps and their unique manias: some raised pyramids, others constructed memoirs with pharaonic titles.

Maybe the two volumes of this quasi-posthumous delirium of Fidel Castro will no longer serve to decorate the official salons and as gifts for the party vanguard, but the colorful launch of this caprice of power, what was said and not said in this little room of the Palace of Conventions, is not wasted. As they are quick to say: there History was made.

The old man spoke of the human and divine. His audience, composed of an exotic mortar of frauds, idolaters, and useful idiots, laughed heartily when the commander asked them to, and stifled their genuine laughter when prudence suggested it.

The old man dropped priceless pearls. Example: he called the Republican candidate Mitt Romney “the least unbearable of the unbearables,” revealed a top secret by claiming that the British intended to drill for oil in the Falklands, and muttered his personal definition of what the Internet is: “a revolutionary instrument that allows the receiving and transmitting of ideas in both directions, something we must learn to use.”

Among lightheadedness and hiccups, including delusions and voice problems, now whispering, now pronouncing indecipherable gibberish like one who speaks an extinct language, Castro more of an exhibition than ever, mentioned, for example, a hybrid between his deceased sister-in-law and the president of Brazil (“Vilma” Rousseff); confessed the error of setting an entire people to study Russian when the whole world was learning English; and when they gave him the phone to talk to the released spy Rene Gonzalez, he mistook him for another member of the Wasp network behind bars, Antonio Guerrero.

He was commanded to run.

So as not to clash with the atmosphere of comic theater, the two cultural acolytes who escorted the lean leader this time, gathered in their harvest. Abel Prieto, Minister of Culture, said of this memoir that “many people in the world today, facing the barbarism, will run to look for it” as a manual of solutions. Miguel Barnet, president of UNEAC, went further: “This book recreates the life of the Commander like a film in the third dimension.”

In all probability this could be the last major public appearance of yesterday’s strongman of the island, today a framework of bones, badly combed hair and babbling colors. I do not think his body can take another six hours of cantata, although with this archaeological specimen one never knows, really.

But like a bittersweet ending, as this turn of tragicomedy that cuts the smile until it becomes a painful grimace, the presentation of the first two volumes of the memoirs of Fidel Castro will leave an image as an historical shame: intellectuals, artists, scientists, teachers, converted into puppets on their strings who applaud, laugh or get excited at the moment a brain scorched by the time requests it, and even, if necessary, an auditorium that would become the army of nurses willing to change the soiled diaper of the incontinent leader.