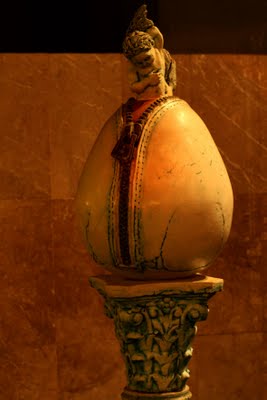 I lived my normal life, at the margin of everything, now without understanding anything too much, but without worrying about it. I looked at death with indifference. At pleasure with a touch of horror. At society like a tolerable evil. At lies like metaphors. At my mother as if she still was my mother. I suspect I was at peace today.

Then I suddenly aged.

On the TV, Fidel and Chavez incarnated the scrawny image of defeat. Not political defeat, of course. In that arena, both tend towards immortality now. Instead in biological defeat. The swan song of the body. Holding on to the Cuban newspapers, that say so little, luckily. Snatching tasteless headlines. Fixing the date of the day before cameras without microphones (the audio was awful, maybe on purpose) so that the whole world would judge them as living zombies.

I looked at my hands. Since high school I had not felt that panic. The visible veins, the porous skin. I thought of my age. I turn 40 in December. In a little while I’ll probably look worse than Fidel. In a lot less time, something like Chavez’s mysterious pelvic abscess could happen to me (except I would have terrible free medical attention in my own country). In no time, there will be no reverse for my aging. In fact, I already feel very old. Ancestral. Archaic. It’s enough, please.

It seems it was essential to liberate that hyper-edited video for the always pressing international public opinion. It seemed pathetic to me. I had never seen Fidel like that (maybe it had been decades since I paid him any attention). I remembered the elderly of my family, all too long-lived. Their mandibles and cheekbones and gesticulations were now those of a Fidel guided more or less by Chavez’s infantile incontinence.

I stretched my hand. I wanted to touch the man before it was too late. It’s called piety. Too late could very well be too late for me. My eyes teared up. There is no beauty in the ruins of a human being. There is never justice in that much decadence. It would be monstrous if we didn’t die, but any prattling cadaver is a startling monstrosity. I say it only for my grandparents, it is understood. I say it only for myself.

When the little video ended, I felt I could not regroup in front of the TV. My joints burned. My cheeks much more. I was hungry. I wanted to go out and buy stuff. Stuff to accompany me to the end of the world. But I didn’t dare. I fancied Planet Cuba as a spectral place, a hologram in past perfect, a fragile fractal whose disciplinary order was to the point of exploding.

My little bones jingled. I felt an insufferable pity for myself. Cuban television was digging the grave where its sensible citizens let themselves fall. I would’ve done it today, almost without noticing. I don’t want to look like that, please. I don’t ever want to see anyone like that.