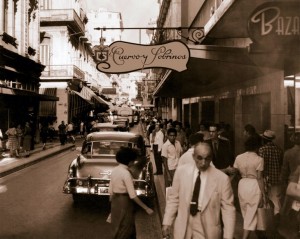 Nicolas, aged 46, has a special nose for a good deal. Big goals are always planned. In those moments, in his well-kept house in the Reparto Sevillano, he meticulously examines various catches and pieces of gold.

Nicolas goes about separating them in little piles according to their qualities. “Here I have no less than 8,000 dollars”, he says and his eyes open measurably. Jewelers like Nicolas track down gold frenetically these days.

The golden metal has always been a big deal in the Havana underground. But today he’s snagged an unusual value. Look here, gold used to go for between 15 and 20 dollars per gram of 10, 14, 18, and 22 carats a year ago, the price has shot up to 30 and 35 dollars.

And it has turned into a true gold fever. The deal leaves a sweet commission. Jewelers are used to having good contacts overseas who come through Havana who pay for the better gold at almost twice the amount invested.

Richard, a circumspect Canadian with the air of an important guy, comes to Cuba regularly. Besides diving in the calm, blue waters of Varadero or playing golf on an 18-hole course, he buys all the gold he can.

He knows every detail of how the black market works on the Island. During a time, he worked for a Canadian company which has a mining business in Cuba. “I pay 52 dollars a gram of gold, and I have friends who, on my arrival, already have bought a lot for me,” signals Richard. The form in which he takes it out of the country he prefers not to state.

According to Mayra, an airport worker, it’s very easy to take gold out in articles of clothing or worked into little sheets. “By showing three 100 dollar bills, they’ll look the other way in Customs and you can take off of the island as much as an elephant”, she says, smiling.

The laws in effect in this country provide for sanctions of 5 years’ imprisonment for illegal trafficking in jewels and precious metals. They will also impose fines between 500 and 1,500 dollars.

Two decades ago, state jewelers bought gold at ridiculous prices. Demitrio, a resident in Vedado, used to offer goldware and porcelain vases. “Not any more. In the street, private jewelers will pay you a lot better. With the gold I sold to the regime at the end of the 80s, they gave me some certificates that only allowed me to buy a washer, a television, and a music set. It was a ripoff”.

In that era, despite the fact that holding dollars was illegal, the government bought and traded for electronic junk or Russian cars, important quantities of gold, silver, fine porcelain, and works of art. But in this summer of 2011, people don’t deal with the State when it’s time to sell gold. There is an army of private jewelers and people who invest their money in gold, ready to pay prices they consider more fair.

Almost all habaneros who owned family relics sold them to the State. Overwhelming necessities to repair their homes and have food in their refrigerator obliged them to unload valuable costume jewelry. With the rise of gold on the international market, fever for the golden metal has also come to Cuba. And jewelers — or people who work for them — have thrown themselves into the street, on the hunt for gold.

“There are still families who have objects made of gold. Besides, we buy teeth and even old Russian Poljot clocks in 22 carat gold plate”, says Ramon, jeweler in Center Havana.

While people poke through their closet or in their memory trunk in search of gold works, the jewelers in the capital take out their calculators.

“This deal will leave me with a good bill. What bothers me is the speed with which gold prices are rising. By December, an 18 carat gram in Cuba could reach 40 or 45 dollars. By that date, I will start to sell acquired gold to contacts I have in Miami”, says Nicolas. He has always had a special nose for good deals.

Photo: Havana, 1950s. The Cuervo Sobrinos Jewelers was the most famous there was on the Island. Maybe some think the photo and the information about this jewelers has no relation to the theme dealt with by Ivan in this post, but as I was born in 1942, I am a witness that for the Cubans, gold was always the most used metal. And not just for the rich people, also for modest families. I recall in this post in 2008, published in my blog. Among the many internet sites you can find dedicated to the gold market, you can find this one.