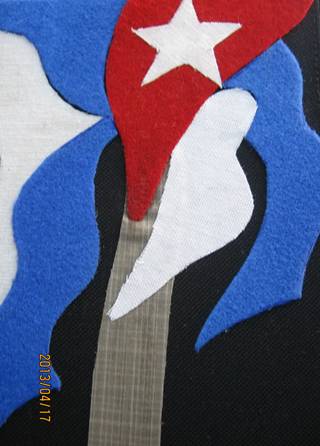 A couple of years ago I wrote about an event I learned of from someone very close to and emotionally attached to it, about how two Cubans who had fought on opposite sides at the Bay of Pigs, this sad military conflict between brothers, with the passing of time had reunited outside our territory, one as a member of Brigade 2506. and the other as a pilot at Playa Girón, as the event is called in Cuba.  By then both of them were exiles.

These two Cubans melted in a forgiving embrace in Miami and one of them, years later, died in the arms of the other. This is the reason that I decided to re-post fragments of this story because I find it so touching. Some of the offspring of both protagonists live now in Florida.

“One night, during one of the usual occasions when they would get together, as they were all seated at the table having a delicious Creole meal, the pilot became ill and excused himself to go to the bathroom.  A few minutes later, the host ran to the bathroom after hearing a noise.  When he got there, the pilot was on the floor. He gently held the pilot in his arms and watched him die.”

All these events, with the passing of years and the frustrations suffered by each other, have made us reflect about how much we were manipulated and how much history has been distorted. For decades, they tried to “sow” in us a false sense of hatred and resentment, which even if it did exist at some point, was dissipated with our everyday lives, with the disenchantment, and especially with the sad experience of having fought for a “future” that never came, watching ourselves forced to separate from our families and friends, an issue that ultimately has been the most painful, in the balance of all that has happened.

“Many years had to go by, many confrontations, disagreements, misunderstandings and defamation campaigns, so that finally two Cubans who no one should have ever converted into enemies were united forever in an embrace.  Two twists of the same flag.”