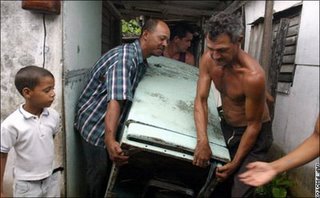 Chronicle of an absurd day (incomplete but will be continued)

The president of my CDR, whom I’ve already said is the best, shouts at me that the fridges will come tomorrow. What time? Who knows.

I go down to try to find out what she knows, I have work in the morning and then I have another job in the evening until ten at night that I don’t like to miss.

The owner of the house must be present, if they’re not there another person can buy it but then that person will be the debtor.

According to the Cuban government I’m the housewife, so I can’t go to work because the debtor is my mother and she can’t come either because she’s waiting for her refrigerator too, at least the owner of the house must be there. Besides, what mysterious reason would keep a housewife from not being there to receive her refrigerator, particularly when the one she has hasn’t kept things cold in the summer for years?

My neighbors advise me to go to work in the morning, because the refrigerators always arrive late, I decide to sacrifice my night job, call the boss, etc. etc. etc.

Claudio’s digital camera is broken, a call to Orlando to see if he will lend me his, it’s complicated; Lía’s incommunicado; Yoani will lend me hers but Ciro isn’t here to go get it.

I’m leaving for work; the phone rings, it’s the president of my CDR, saying that I’d better not go to work, they called her and they’re coming at nine.

Call the other boss, Ciro worried. Two colleagues tell me they spent THREE DAYS waiting for their refrigerators. I hang up the phone, not happy with this information.

Nothing at all, all the neighbors walk around like zombies waiting, no one went to work. Expectation.

Claudio arrives, says that he can do it with his analog camera, but developing and scanning will delay it. He doesn’t even have the damn camera with him, try to convince him to go get it, to wake up Lía to ask if she can bring it over, to call Yoani. Wait.

Lia’s mother refuses to wake her, nobody wants to go to Yoani’s, the laziness already begins.

I’m leafing through the phone book looking for a charitable soul who lives nearby and wants to lend me a camera.

Relaxed atmosphere, Claudio doesn’t stop making jokes. Says now we must prepare ourselves psychologically for them to take the Russian refrigerator at 6:00 pm in the evening and to bring the other at midnight, with luck.

I go to the movies.
At the exit I see some trucks, I run home, in fact they are bringing fridges, but not mine.
It seems they’ll bring it tomorrow.

Those who handle the trucks are some farmers, it seems they’ve gone home and won’t return today. Maybe they’ll come on Monday.

Suspended the practice of PPR for obvious reasons, suspended also Gorki’s birthday party.
I have no mail.
I can’t post.
Lía is still sleeping (it’s incredible).
I stop here to be continued when the day finally comes that they bring the refrigerator…

Note: In conjunction with Miriam Leiva’s post about bank loans to buy saucepans, Translating Cuba has decided to re-post an old series of posts Claudia Cadelo about refrigerators, to give our readers a fuller understanding of how things work in Cuba. This is Part 2.