On the 8th of May, Juan Wilfredo Soto Garcia died in Santa Clara, the victim of a beating received on the 5th day (of the month). He had left with me the blow of the news, and my Christian principles inculcated since a I was boy were put to the test. The time was coming for me to choose between acting like the bishop and the Levite in the biblical parable, with idleness and evasion before violence; or as the repudiated Samaritan who had without a doubt the sensation of acting as God ordains.

Scandalized by the official treatment given to the case on the 8th of June, I presented myself together with Pastor Ricardo Santiago Medina before the Prosecutor General of the Republic demanding an investigation. In the following month, on the 8th of July, a list of signatures was delivered to the same office backing up our solicitation. I understand that these lists keep growing to perform new submissions.

Although the response from this entity was dated the 19th of July on top of an erasure made with white-out and the issue date of 1 August with number 4246, a postmark on the envelope dated the 8th of August as the occasion of its delivery into my hands. It communicated that in the foregoing, the Provincial Prosecutor of Villa Clara would pursue this matter.

As the bureaucratic sliding doors hold no attraction for me, much less if I smell sterile adulation, and as neither date was indicated to attend the provincial entity nor was I advised any limit to my demand, I decided to wait for the arrival of September now that I know excessively the immobility of August by its almost generalized summer vacations. But I must remember that the Provincial Prosecutor advanced my case, and this time with the news of a new eight. 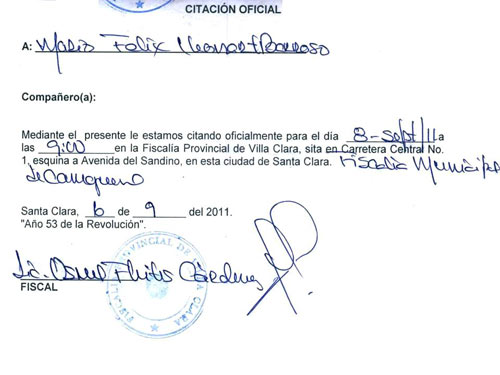 A conviction stimulates me in my principles, independently of the result that my meeting produces this 8th of September with the representative of the Provincial Prosecutor of Villa Clara, which evidently will fulfill the orientations of the central structures of the State. My confidence is placed in God, and for that God, such and as is affirmed in Psalm 97:2, justice and judgment are the cement of His throne.