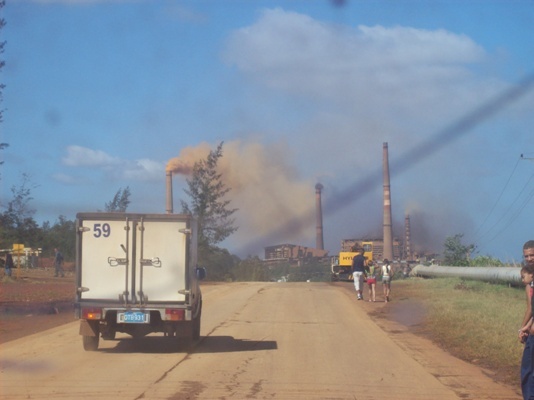 With the arrest and possible prosecution of six senior executives of the “René Ramos Latourt” Nickel Company in Nicaro, Holguin, the Cuban government has just been given one more setback. The officials involved, were replacing some of the weight of the finished product with zinc, to make up the promised weights, since they weren’t able to meet the auditors’ quota of 23 TM a day. Everyone earned a bonus — in hard currency — for meeting production goals. According to sources consulted, after they’d met the quotas, they would go back later and substitute nickel back for the zinc, so it was all good. They never actually exported the zinc instead of nickel, according to some miners.

It’s funny, a sort of Robin Hood in reverse. Representatives of the State who didn’t agree with the high goals set by the Ministry of Basic Industries, and the all-powerful Nickel Union, trying to alleviate a little bit the plight of the dispossessed in modern socialism. The Sherwood Forest has become Nicaro, one-time emporium of Cuban nickel, with a Lady Marian in the recently fired persona of the engineer Yadira Garcia Vera, and an army of miners with their faces dirty from the red soil of the neighborhood, could all be part of a new telenovela, a Cuban soap opera that wouldn’t pass muster, not even with Rolando Alfonso Borges (ideologue of the Politburo) dead and six feet underground.

Those arrested and currently being held in prison in Holguin are Andrew Turro Medina, director general; Rafael Rodriguez Rodriguez, chief engineer; Hector Rodriguez Alvellana, technical director; Rolando Pérez Rodríguez, dispatch director; Idelfonso Laurencio Rivera, technologist; and Nelson Almira Elias, head of the Sinter plant in Mayarí, an annex of the factory in question. All of them have been locked in dark cells of the operations headquarters of the political police in the district of Pedernales, on the outskirts of the city, for 72 days. Of these, Medina Turro shows constant alterations in blood pressure and according to relatives despairs of his life and the confinement imposed on him. They will have to pay attention as, according to the miners, the determination to teach them a lesson comes from the hand of Ramiro Valdes himself, which is not surprising if we examine the record of this “hard ass” among the ossified group of the Cuban nomenklatura, an example of a drowned man still kicking… And how.