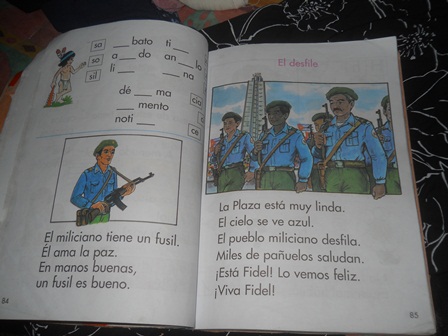 Text in schoolbook: The soldier has a gun. He loves peace. In good hands, a gun is good. The Plaza is very pretty. The sky is blue. The people’s militia parades. Thousands of handkerchiefs salute. It is Fidel! We see him happy. Long live Fidel!

For some time I’ve been disgusted that I have to accept my daughter learning to read with sentences that combine the memories and feelings of childhood with the political interests of the State. But I assumed that some point I would prepare my own report and send it to Amnesty International, complaining of the bad work of UNICEF in Cuba, for its failure to act with respect to the political indoctrination children receive here.

But the last straw was Olivia’s computer teacher. I went to see her to clarify an event the child told me about when we were walking to school. Moises, one of her buddies, said he had a Biblical name and the teacher automatically put an end to the conversation saying to the children, “This is not a church.”

I knew the answer I would find is that education in Cuba is secular. Thus, the values of the Gospel should be taught to them at home. But I didn’t expect that the response from the computer teacher would be that in class, once the children crossed the threshold of the door, she could teach them anything she wanted. I pointed out the posters of post-totalitarian political icons that are hung on the walls of the classroom and said that no one had consulted me, as a mother, about whether I agree with those values.

I knew, without being able to get what they were showing me, about the “educational” software that teaches the children, which contains the ideological campaign that sets the moral tone for many of these people who are now six years old. When I couldn’t stand listening any more I expressed that when Cuba is a free country she would be ashamed of what she was telling me.

In the end, regardless of my rebellion, my daughter continues attending her class and I’m not sure if the computer teacher has recognized that she cannot put herself above my rights as a mother to choose the education of my daughter.