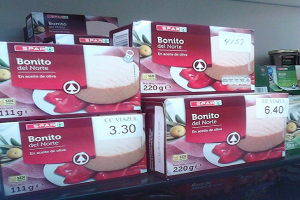 That the State sells cheap products at high prices is a dreadful cynicism.

HAVANA, Cuba. — First there appeared the “SPAR” products.  Then, on a shelf of the Ultra store in Central Havana, we saw the unmistakable seal with the little red bird from “Auchan.”  Imported products from Europe, which is equivalent to saying, in political terms, from the European Union.

“Very expensive.  Are you looking?  Almost no one buys them,” says the grocer at a small neighborhood market that now displays, also, “SPAR” jellies, cans of bonito and tuna at astronomical prices (in comparison with the buying power in Cuba) and that people do not seem to see; committed as they often are to getting a little package of chicken thighs or some greasy alternative and so to complete the Cuban menu of more fortunate days, too distantly spaced on the calendar: rice, beans, meat, vegetables and the main course, that now cannot be fish or beef.

Everything that the State sells is so expensive that for ordinary Cubans any basic product becomes a luxury.

With toilet paper there are those who can give themselves the luxury and those who prefer to save it to buy something more urgent.

But that the State is selling “Auchan” at elite prices, a line of products for popular sectors, seems a dreadful cynicism. Because if these products have been leaked through the porosity of the Common Position it means that the Cuban people are thought of as the most affected by scarcity and need. The Cuban people are thought of as hostages to a policy that within the Island, with everyone and the Common Position, has remained immutable, in spite of any reformist makeup.

At the same time that the Cuban government tries to disguise from national and foreign public opinion its unquestionable violations of human rights, it cries, denouncing as meddlesome the position of the European Union and of the United States in defense of democracy for Cubans.

Presumably the European Union will be considering that in all these years it has not managed to benefit the population by the policy that it maintained with respect to the island’s government.

They begin to perceive the first signs of opening, changes must begin, first order products appear, by strict order of learned survival.  Because it is not the same to eat breakfast with cement-like bread and water as to make it with “SPAR” cereals.

But the Cuban government does not recognize liberties, it does not respect rights; which would also bring prosperity to Cuban homes, without exception!  Bent on its own survival, Castro-ism bets on squeezing the nut, and we Cubans pass by the shelf because those delicacies do not appear to have been made for us.

The Cuban government’s message for nationals and foreigners seems the same cynicism as always: “I keep collecting currency, I keep being the same extractor as always, the same parasite as always.”

A government that hijacks freedoms should be made to change, especially when the people under its domination have been incapacitated from defending themselves after more than half a century of individual and collective denial.