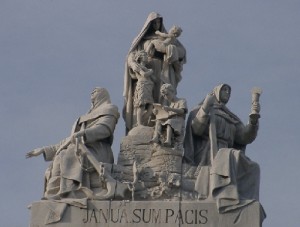 Only two cemeteries in Paris and Barcelona exceed in funeral sculptures and architectural layout the majesty of the Cementerio de Colon (Columbus Cemetery) which occupies 140 acres in the elegant district of Vedado and is bounded by a fence that silences the bustling Havana, while those who make the cross as they walk or drive along Avenue Zapata, the obligatory destiny of the mortals who don’t avoid the Catholic rituals of burial and exhumation, nor opted for cremation in the ovens common in some hospitals in the city.

Built in the late 1860’s for a population five times greater than the 100,000 inhabitants at the time, the cemetery was expanded and remodeled later, according to the flow of crises or bonanzas crossing the island, whose elites turned it into a spiritual space that evokes life from death.

Although there are 20 more cemeteries in Havana, the Colon cemetery is home to one of five Cubans, which represents 80% of funerals in the capital and almost 20% of those in the whole country. It is a material challenge with ethical consequences for the cemetery personnel, facing shortages, theft, abandonment of family vaults and lost tombs, ossuaries and monuments of historical, architectural and cultural interest.

The stones of memory that try to perpetuate life in the sunny acres of this capital mausoleum are a testimony to the imagination, the social level, aesthetic taste and even human behavior and the desire for uniqueness among many Havanans.

Archive specialists say that at the end of 2009 the vast necropolis housed one hundred thousand remains in the state ossuaries, while the total number of individuals was one million two hundred thousand, which requires constant exhumation and use of the incinerator as an alternative for many remains unclaimed by family. This kind dispossession of the moral remains is a daily occurrence at the site, barely visible to passersby and tourists visiting the ancient streets of the cemetery, whose state varies based on the quality of materials used in vaults, tombs and sculptures.

To insure that there is a significant investment by the Office of the Historian of the City, the Provincial Department of Community Services, which administers the burial grounds, and institutions of Spain, the nation most represented after Cuba, as its vast descendants on the island acquired plots and mausoleums built to evoke their native Andalusia, Asturias, Balearic Islands, Castile, Catalonia, Galicia, Canary Islands, Navarra and the Basque Country, Valencia, etc.

Weather, climate, the exodus or the misery of families who owned the vaults, the death of some of them and the lack of materials in the administration seem to fit in with the redesign of a city that is over two million people and requires new solutions to the logical extinction of people.

Recent investments were directed to restore the north gate, of great symbolic value, the central chapel, and monuments of historical and social interest, in addition to replacing the caps on thousands of vaults and meet the ongoing needs of cleaning and gardening. The challenge of increased cost lies in the endless restorations of statues, mausoleums and monuments erected to figures and symbols of the city, such as La Milagrosa which viewed by most of the four thousand people who come daily to the most famous necropolis of Cuba. 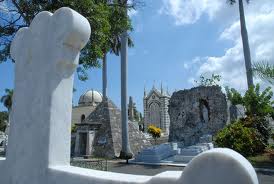 Colon Cemetery, a kind of museum with walls running for four kilometers through Havana, is a life’s work to preserves its universality. Living together there for eternity and in perfect harmony are a Byzantine dome, an Egyptian pyramid, a Westernized obelisk, the entrance to a Roman catacomb, a Florentine Gothic palace, the miraculous French Lady of Lourdes and four very Cuban royal palms. Other groups of sculptures and mausoleums dedicated to heroes, dignitaries and artists of the colonial and republican period confirm the power, spiritual wealth and values bequeathed by our predecessors.

Preserving this monumental jewel of the island’s culture is equivalent to writing on the stones of memory and recalling our own names to relatives who journeyed through the brief galaxy of life.