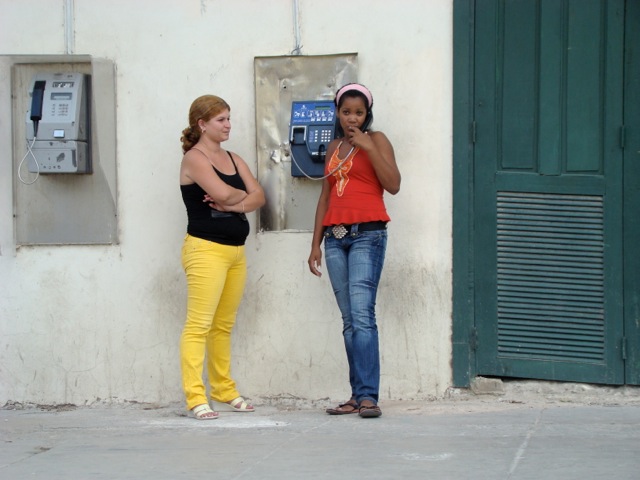 That we are in a state of ruin is something that no Cuban in his or her right mind really questions, though we have become all too accustomed to the cynicism of the architects of this disaster, who continue to blame the “Yankee blockade” for all the misery afflicting people.

As though this were not enough, it is appalling to see Havana overrun with billboards and posters touting utopian slogans such as “Let us fight for a prosperous and sustainable socialism.” And “Revolution means never lying or violating ethical principles.” Or “Banish the fear of looking for problems in fulfilling our duties.” One cannot walk even a few kilometers to refill a mobile phone account, to wait in line in hopes of resolving some bureaucratic issue or to file a complaint without coming across a marquee announcing, “ETECSA, on line with the world.”

What is obvious is that the state telecommunications monopoly, commonly known as ETECSA, is no longer a public-private partnership with financial backing from the multi-national telecommunications firm Telecom, whose employees wore uniforms, drove a fleet of vehicles and had access to spare parts in order to respond to the needs of its customers.

Some 85% of workers questioned believe that, ever since ETECSA fell into the hands of GAE – a business arm of the Ministry of the Interior (MININT) – it has become a kind of Cinderella. Innumerable questionnaires indicate that it has also become known for its inefficiency.

Rolando Chapotín, a 70-year-old retiree from Vedado, describes how an ETESCA employee fit together various bits of cable to fix a problem with his landline. “It was obvious he did not have the parts he needed,” says Chapotín, “but he worked hard to resolve the problem until fortunately it was fixed. That young man made me forget about all the waiting in line and arguments with bureaucrats. Now I would like to know where the hell all the money that GAE takes in is going.”

To the question “Why does it take so long for ETECSA to resolve problems that have been reported?,” a technician replies, “We don’t have the vehicles, we don’t have the materials, we are short-staffed, wiring is no longer well-sealed and whenever there is a downpour, the problems multiply. There’s also a significant number of customers who have spent three months waiting for their landlines to be repaired.” The technician summed it up by saying, “ETESCA might be on line with the world, but not so much with Cuba.”

From Moron to “Cuba Says”

The government sponsored website Cubadebate reported that this past October a meeting of company directors from the eight eastern provinces was held in the town of Morón. It was chaired by Mayra Arevich, an engineer and the current chief executive of ETECSA. The goal was to prioritize the handling of complaints from the public and to analyze problems associated with mobile phones and landlines, services to which only three million customers currently have access.

Hilda Arias, ETECSA’s head of mobile phone services, told those present that there would be an increase in capacity of 270,000 just this year, resulting in a growth of two million mobile phone lines, or the equivalent of 18% of Cuba’s population.

According to anonymous sources a significant part of this increased capacity is destined for use by the Revolutionary Armed Forces Ministry (MINFAR), the Council of State, the Council of Ministers, the offices of the Communist Party and other governmental organizations. These are services to be paid for indirectly by private customers.

A recent installment Cuba Dice (Cuba Says) — an ongoing series broadcast by Star Television News (NTV) in which official journalists solicit opinions on pertinent topics from people on the street — raised the issue of problems with telecommunication services.

As might be expected, 90% of respondents complained of punitive fees on mobile phone and internet services, and the ludicrous 5 CUC mandatory monthly charge for maintaining cell phone service.*

However, the most pointed criticisms involved the refusal by officials to increase the number of landlines and pay phones, restrictions which impact the poor, who cannot afford the cost of mobile phone service.

In interviews company directors distanced themselves from the serious financial problems facing ETECSA and its inability to made new investments in infrastructure. They say that most of its income, which is in the form of convertible pesos (CUCs), is spent just on subsidizing local phone service.

“Mobile phone service in Cuba costs 2.50 dollars a month,” says Hilda Arias, the aforementioned director of ETECSA’s cell phone services. According to Arias the company is obliged to offer double-airtime minutes to attract overseas customers due to the need for “fresh sources of hard currency.”

A former ETECSA director, who requested anonymity, stated that in the 1990s a Telecom vice-president informed his Cuban partners that his company was willing to make the investments necessary to provide a landline to any Cuban who asked for one.

“At the time international calls were the principal source of ETECSA’s revenue and it was clear that increasing the number of domestic customers would increase profits,” he says.

“The company’s Cuban partners, however, were strongly opposed and agreed to only a modest expansion, with priority given to workers in healthcare and education. Assigning the remaining increase in capacity was left to the mercy of Revolutionary communities and organizations.

“Up till now,” says the former director, “Cuba has not even been able to double the capacity it had in 1959, when there were eight landlines for every hundred residents and it ranked 14th in the world in terms of telephone coverage.”

In contrast the former director points to the case of neighboring Haiti, which had a rate of phone coverage lower than that of Cuba. But because landlines and pay phones were considered obsolete, it successfully extended mobile phone service to nearly 85% of the population in a very short period of time.

Asking not to be identified, a former MININT official stated, “One of the justifications for slowing the growth of phone service in Cuba is that there is a requirement that any increase in private telephone coverage be augmented by an equivalent increase in the monitoring capabilities of the CIN, MININT’s counter-intelligence branch. The systems for telephone surveillance, known as K1 and K2, must have a capability of 100%, as was the case in the former East Germany.”

According to this source, internet use is also under surveillance. Monitoring, however, is not clandestine. State Security actually likes citizens to feel they are being watched.

“ETECSA has become a military organization,” says an anonymous worker. He is referring to the change in administrative structure under the aegis of GAE. “Now the old branches are called divisions and other department have been reclassified with names like Strategic Projects and Logistics.”

In spite of these changes, some ETECSA directors and workers are still dipping their hands in the till. As is the case in any given part of Cuba, corruption thrives in the absence of other financial incentives. Sources indicate that one distinctive feature of ETECSA is that it is the employees who previously worked at MINFAR and MININT who have proven to be the most corrupt.

Some ETECSA workers admit to having been shocked when Miamir Mesa, an engineer and former head of the company, was given a promotion and put in charge of the Ministry of Communications after a notorious corruption scandal which came to light in July 2010 involving Cubacell as well as Logistica, a firm with ties to foreign companies.

During his tenure at ETECSA he used and abused “means of collateral responsibility” for which company directors were called to account for irregularities and misdeeds by their subordinates.

The client is never right

At the end of the October 25th broadcast of Cuba Says on NTV, a constituent from the Carmelo people’s council in Havana’s Vedado district — a man nicknamed “el Master” in reference to his level of college education — made a statement.

“No one has yet explained to me why Cubans complain so much,” he said. “A mobile phone contract costs 120 CUC but they have reduced it to 30. A nation’s mobile phone system is not some trinket meant to be sold on a street corner. ETECSA serves society and a society must work with the resources at its disposal. Let’s be clear. Mobile phone and internet fees are high but no one is taking money out of anyone’s pocket. We might pay 4.50 CUC for one hour of internet time but we might also get a surgical procedure for free that would cost $20,000 in the US.”

He added, “We Revolutionaries have not seen the need for an election in fifty-four years. To those non-conformists who have left for other parts, well, let them stay there.”

*Translator’s note: The fee, roughly equal to five US dollars, is equivalent to 25% of the average monthly salary in Cuba.