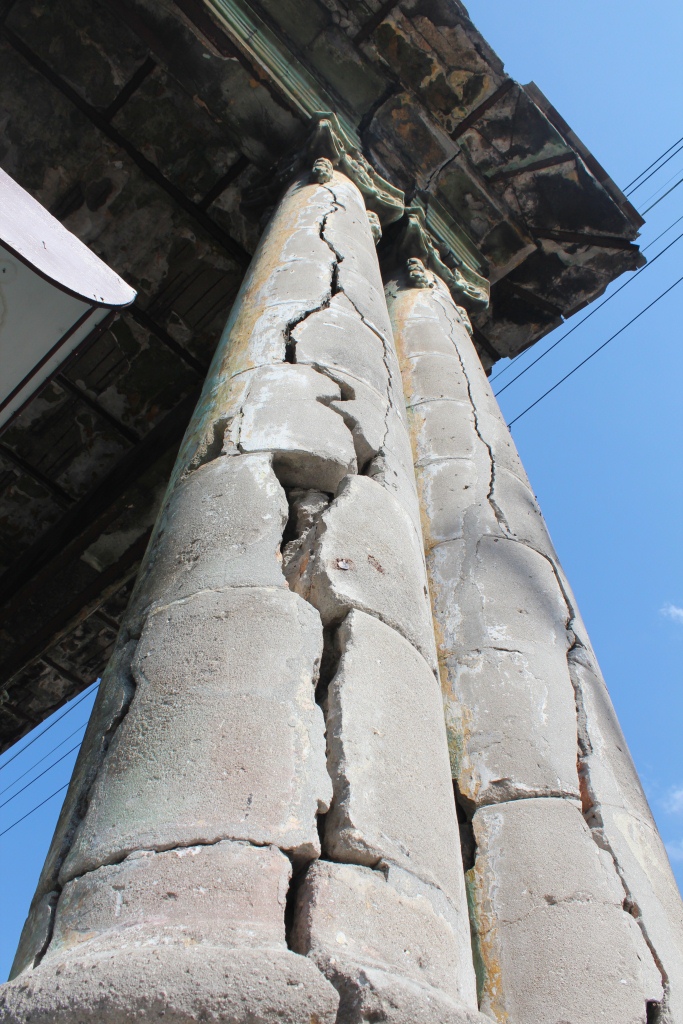 They abandoned the spring. The birds that once nested in their clean capitals are no longer impregnated there, and the white doves that perched on their shoulders never returned after the corner started to smell rancid, of decomposed filth, left behind by grey tides that brought from far off horizons the ships marked with hammers and sickles.

They know the course of the years collapsed buildings that were once as strong as this and they are terrified of the idea that sand and dust will dissolve them, with neither pain nor glory, almagamating them into the filth of the street.

Here are the two old pillars living on past glories, counting the minutes not knowing what to do and with a weight that is too hard, in the middle of an avenue whose vertigo grows and that looks indifferent now; a rough street inhabited by specters that finally get to see when the sun outlines it, the impure clay foundation all cracked and the tarnish unnoticed until recently. Now a patina of soot grows were once was the golden painting of bygone days that do not return. Now growing at their feet only the withered grass damp from the dogs and all around a carpet of dead sparrows.

There they are, humiliated by time, charred to the ground groaning their last regret, the death rattle of ruin, the crackling of their slow collapse. A remnant of paint hides the loneliness that distills today their human cracks. They are doomed to succumb in a few years because, you know it well, there will be no before or after them, a colonnade that does not succumb to the unsympathetic weather some unpredictable day in this world. They say it but the swallows who know remote regions, who fled the burning sun blind and fevered on the road, the dark and painful swallows fly high, who fled toward winter to forget in peace, to never return to edge the red sky of our sunsets.