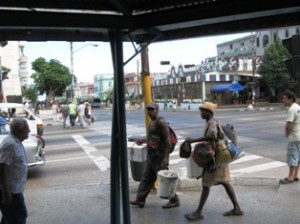 In spite of his osteoarthritis and mild senile dementia, Demetrio, 76-years-old, works as a night watchman at a primary school four nights a week. On his days off he get up before 5 AM to buy bread for the owners of various private cafes.

He is paid 480 pesos per month to purchase the bread, which combined with his 280 peso custodian’s salary and his 211 peso pension brings in a total 971 pesos a month. From this Demetrio takes 500 pesos to a currency exchange and buys 20 convertible pesos, or CUC’s, at the exchange rate of 25 pesos per CUC. With these CUC’s he then buys cooking oil, canned tomatoes, soap and other essential items.

With the remaining 471 pesos he must think up ways to pay for light and groceries. As a result there is no way this old man, burdened by ailments, can prepare two hot meals a day. This senior citizen no longer thinks about repairing his dilapidated apartment. Or about buying clothes or shoes. A widower of six years, his mission is simply to survive the harsh conditions of olive green socialism.

What concerns him most is being able to have four dishes for dinner: rice, beans, a salad or vegetable, and some form of protein, such as eggs, chicken, pork or catfish. Before going to bed, he prays that the Lord will take him. He wants to be together again with his wife.

Compared to Raudel, another one of Havana’sunfortunates, Demetrio is “rich.” Raudel is 73-years-old and sleepsat night when and wherever he can — a park, a doorway or an abandoned building. He is part of the herd of homeless vagrants whom the official press ignores.

Raudel is a “buzo,” as they call those who search through trashbins and garbage cans. He usually “dumpster dives” in Reparto Sevillano. In a frayed and dirty bag he collects “cucumbers” (liter and a half plastic bottles) and empty glass bottles. Those who sell vinegar and tomato concentrate pay him a peso for each bottle.

On a good day, Raudel can make 50 to 60 pesos — enough to pay 30 pesos for a small plate of rice, boiled vegetables and a slice of meat insome little privately owned cafe.

He spends the rest of the money on the drink of the forgotten — homemade rum manufactured from household alcohol filtered through a coil with industrial charcoal and horse shit.

Sometimes he gets a free meal when, while rummaging through garbage, he finds a can of food and the remnants of a meal. The “grand prize” is when he comes across an alarm clock that works, circuit boards for computers or televisions and foreign magazines in good condition. He knows people who will pay good money for these things.

He sleeps six to seven hours when and wherever he can. He lays out an old, dirty bedspread and goes to sleep, drunk and unwashed. The worst thing for a homeless Cuban is when the weather turns cold or a storm is approaching. Then Raudel pays 10 pesos to the custodian of a state garage who lets him sleep in a Russian truck.

Don’t even ask about his health. He doesn’t remember the last time he caught a cold. The future? He just lives day to day. He is happy when the trashcans have lots of plastic bottles and plenty of food, and Vincente has “train spark” (cheap rum) for sale. Everything else is nonsense.

Photo: The elderly are not the only ones living on the edge in Havana today. There are also men and women under 50, such as this couple photographed by Yuri Valle Roca at the corner of 12th and 23rd streets in Vedado.