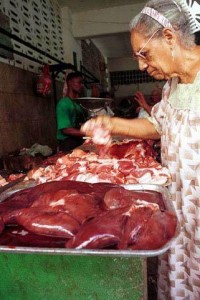 Fooling Nivaldo, 71, is not an easy task. When the old man goes shopping, in his inseparable shopping bag he carries a portable scale. As he rummages through the meat, fruit and vegetables covered with dirt on the metallic trays at the farmers market, the problems arise.

At the checkout, the traders try to scam him, charging more for the products than they weigh. Demanding his rights has given the old man a reputation for stinginess and unfriendliness.

“Yesterday I got twelve pounds of pork oat 23 pesos a pound, when I checked the weight it was 2-1/2 pounds under. It’s common. At every market there are State scales to check they’re selling you the exact weight, but they often rig them. It’s a national epidemic. Fucking people over is like a sport,” says Nivaldo, while rushing to get home before the clouds burst.

Scamming and adulteration food and other items is an old story. In many hard currency shops and snack bars, the principal mission of the staff is to “fine” (i.e. cheat) the customer. There are new methods. Others are clumsy bungles.

In the Island of Cuba Mall, a stone’s throw from the National Capitol building, Luisa, 46, reached into the meat fridges and pulled out two packages of chicken thighs, where it showed the price according to weight.

She added it up. One package cost 2.60 and the other 2.40. In total, 5 convertible pesos. The math doesn’t fail. But in Cuba numbers are magic. Quietly, the cashier sealed the two packages and put the in a nylon bag and said they were 5.30.

Luisa explained that there must have been a mistake. She opened the sealed packages and showed them. The cashier admitted it and replied that “it was the fault of the cash register.”

If you don’t look after yourself, the vendors will blatantly cheat you. Marco, who works in a hard currency supermarket, offers a justification. “We earn very little. The way we get money is to “fine” the customer. Those who work in this sector invest hundreds of dollars to get a place. The thing is hot and we have to go home with money. We also have families.”

The question Marco preferred not to answer was: if the customers are not at fault for their low salaries, why don’t they complain to the union and mount a loud protest in the Plaza of the Revolution.

Ah, no, this they would never do. They could go to jail. Given the lack of legal mechanisms that allow service workers to demand better salaries, the solution is to discharge their repressed anger in the pockets of the consumers.

In the hotels, discos and restaurants where the tourists usually go, the “fines” increase. Many managers of tourist restaurants have a doctorate in the subject. Looking at the credit cards and details like expensive watches or an Apple laptop, they calculate how much money they can skim off.

A few days ago three habaneros living in Miami arrived with several friends at a hard currency snack bar to drink beer in style. On the fly, the employee caught they were “Cubans from the other side.” Every so often, while collecting the empty beer cans, he talked about the Major Leagues. He established empathy with them. After 11 at night, inebriated, happy to share with attentive staff, singing boleros and taking photos, they paid 130 CUC. An excessive amount.

Right now, the Cuban-Americans are the best clients. They leave good tips. And if the guy gets drunk, the “fine” is even more.

To deceive the customer is latent in all sectors of the national life. If you walk down any street in Havana, you will see a multitude of plastic tables of the State food service offering pork sandwiches for 5 pesos, servings of fried rise at 15 pesos and fried chicken at 1.60 an ounce.

I have always been amazed by the capacity of the tropical bureaucracy for absurd formalisms. Every little table has a weight and a sign that indicates the grams of each product a consumer should have.

A dapper “chef” picks a greasy pork leg, skin with strips of meat and dried fruit. He weighs it and puts the hash in a round pan. Does each consumer have to walk around with a portable scale to verify the exact grams? The old Nivaldo does. But the vast majority don’t worry about weighing what they buy.

We Cubans are not used to being scammed. An “extra payment” we accept with discipline, like everything in Cuba. From listening to a speech promising a bright future that never comes, to buying our 80 grams of bread every day that almost always weighs about half that.

In street slang, duping customers is called “fighting/” It’s a vicious circle. You fuck me over from behind the bar, and late I overcharge you 20 CUC for a medical checkup.

It’s a kind of pact. We fuck each other over. Few have the courage to point out those guilty of transforming our lives into a competition to see who can hurt others the most.

The loss of values has been one of the greatest damages caused by the Castro’s in their 54 year reign. To recover them will be very expensive.

Photo: Sale of pig’s liver at a Havana farmer’s market, taken from Worldisround.