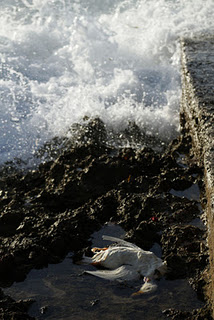 If we have to kill, we kill.” In Cuba in the nineties that statement was heard on more than one occasion, always in the voice of the cops in the process of repression, never political repression but of conflicts of tumultuous types, including the night of broken glass in a movie theater in the middle of the Havana Latin American Film Festival.

This was in the most intractable years of the Special Period in Times of Peace. After the turn of the century and the millennium I remember hearing it again. At first, I got my hopes up about the civic and humanistic education the National Revolutionary Police must be receiving. Then testimonies began to appear about the word “copyright” having been a part of the interrogations of the secret security organs. Finally, the anachronism implicit in the grammatical construction became obvious. Technically, “they had to kill, and they killed.” I would dare to conjugate it as “they will continue to have to kill, and they will kill.”

There is the Death Penalty to prove it, this fossilized euphemism of our obsolete Penal Code,as flamboyant as at the beginning of the Cuban Revolution. The truth is legalized death is not painful for nothing among our populace. In recent months, given the dizzying spiral of robberies and crimes in the capital, it sounds like chance that Raul Castro will have to apply with an iron hand the “stick” (ie, the shooting of the prisoner tied to a pole, a practice that the current President exercised).

Year after year I come closer to the guilt of my colleagues, remnants of the scientific and cultural field (I am a biochemist and writer). The come to leave the country in my person, worried about a wasted destination (mine; that of the country matters to none of them). Paradoxically, with no little pain, but without remorse, I recommend to all of them to leave Cuba behind. That saving their lives saves the imaginary memory of our nation. That the Cuba of the soul can only survive far from the Cuban of the body. That nobody deserves to be executioner, nor victim in this low intensity massacre. Nor even a witness.

Three decades after the disgusting acts of repudiation during the mass exodus from the port of Mariel in 1980 (I experienced in the Pioneer flesh of the first girl I loved), I agree incredibly with the government slogans from then: Let them go, let them go …!

I have a motive of moral superior force. I believe in the inviolability of human life (and of all life) and I know full well that many of my colleagues would end up condemned to ostracism in Cuba that could radicalize them and earn them a prison sentence for which they are absolutely not prepared and where the most natural thing in the world would be to die (by the rampant violence among inmates, by the incurable diseases in these complex conditions, by the terminal sadness of a wasted destiny (theirs; mine no longer matters to me).

Our demagogues, on the island as in exile, it costs them money to acknowledge it, but the democratic transition in Cuba first has to be demographic. In fact, more than a fifth of our population is already cosmopolitically free. Few of the little republics of Latin America can boast of such an index of civilization.

The native land does not also have to be the land of the cemetery. The liquidator logic imposed on the masses from the elite is as insulting as it is inevitable and merges with the liquidator logic imposed on the elite from the masses. There is no realistic life in that permanently tense climate between arrogance and despotism. Cuba as carrion. If they have to kill, let them kill each other, compañeros.

At this point my colleagues promptly embraced me in tears of gratitude and leave. The feeling they leave me with is that of having been their savior. Seriously. The Cuban state stigmatizes death. I exile them to life.