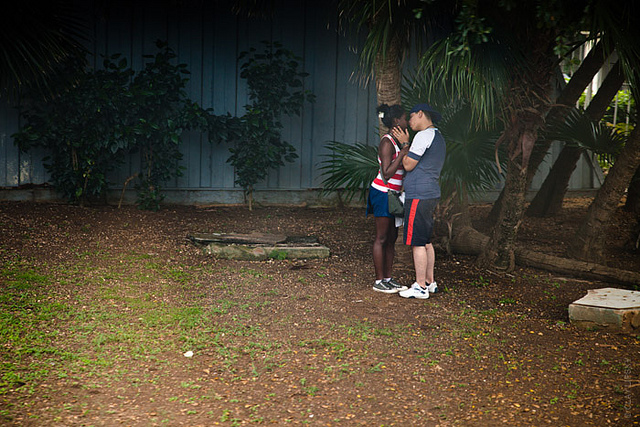 There is still the ration book. Potatoes are scarce, the price of fruit is going through the roof, and drinking a natural orange juice is a luxury. Sanitary pads are only distributed every two months — a package of ten to menstruating women. And connecting to the Internet is still a science fiction story for a large part of the population.

However, sex is liberated. A national sport. According to some, the infidelity between couples is a gene human beings carry. If those verse in it give a tour of Cuba, we can confirm their strange theories.

And they confirm that teenagers of 12 and 13 are “experts” in the field. Unaware that Australian is a continent, or that Henry Lee was in independence fighter in the American Revolution and not the creator of Lee jeans. But when it comes to sex, they have countless stories to tell. For many boys, their fathers teach them from the time they’re small, that the more women they have the more macho they are.

It’s the ABCs of a Cuban father to his son; life is dick. Men don’t cry. And the boss of the house is the one with balls. If in the 19th and 20th century fathers paid prostitutes to de-flower their sons, today it’s not necessary.

Most children are more up-to-date and more promiscuous than their parents. Having a “honey” or a lover is synonymous with masculinity. An athlete of sex. A son of a bitch of the street.

The more lovers, the more drinks friends pay for. In the bars they offer “wise” council about how to get into an impossible female. For hours, they tell sex anecdotes without ceasing to drink like Cossacks, beer and cheap rum.

Sex in Cuba is messy, but it has its hierarchies. Not like the neighborhood pimp that manages a five-star hotel. A capital that’s a general. A boring and monotonous deputy to parliament that’s a mandarin.

The “honeys” of the superiors respect them. Secretly they look at their breasts or butt, but desist from the rude compliment or indecent proposal.  A boss can fire you or make your life impossible if he finds you prowling around his woman.

Meanwhile, the more stars on your epaulette or if your photo appears among the members of the Central Committee, the more chances you have to give major luxuries to your lovers. You can even choose: blondes brunettes, mulatto or black. Or have a collection with one of each. As all are stunning, with pride and discretion we see you on the weekend in exclusive recreational villas for senior officers, or at parties their wives don’t attend.

Being the “honey” of a major character in Cuba, is synonymous with social status. As if rocket-propelled, you climb the ladder at work. All over Havana everyone is talking about the meteoric rise of a famous television report, who is both beautiful and talented. According to the rumors, the lucky guy who sleeps with her is the “boss of the bosses.”

It’s still remembered that in the 90s, when Carlos Aldana was the third strong man on the island, in charge of the ideological sector of the Communist Party, came to have three “darling” journalists, the three well-known.

Even Fidel Castro, between sips of Jack’s Daniel, liked to talk in private about his sexual exploits, like the affair he had with the German Marita Lorenz and she told about it in a book. In a macho-Fidelista Revolution like the Cuban one, having amorous adventures in bulk sets you apart from the pack. A rogue, a pimp. A hallmark of virility that makes the difference.

In a note from Juan Juan Almeida published in Marti News, told about the debauchery of Cuban officials in Angola. He gave a figure, taking from the Ministry of the Armed Forces: 40% of the woman who were on the mission in Angola were harassed or raped. That figure has never appeared in the newspaper Granma. For me, Almeida Jr. is a highly credible source. He lived among the creme de la creme of the Cuban hierarchy. His father, a great person in the opinion of his relatives, took to his bed every woman who stirred his pleasure.

And I pardon their children and wives. The great difference between being the “honey” of a leader and dying of hunger, are luxuries and comforts. The guy with few resources invites you to a movie and buys you popcorn or peanuts. The “bigwig” puts a roof over your head. And if you really satisfy him he buys you a car. And in addition, you climb the ladder in your profession.

There are women who live off their lovers, like the pimps off their prostitutes. And sometimes they have more than one “girlfriend,” they compete to see who gets more and remains preferred. Recently I heard an argument between two hookers. One said to the other, “Yeah, I’m a monster, I bought my boyfriend a motorcycle and three gold chains. The others just give him shirts and sneakers.”

You can live in tile house in Carraguao, or a residence in Miramar. But if you were raised to it, you have to have a “honey.” In a conversation between “tough men,” if you don’t talk about the “girlfriends,” “honeys” or lovers you have, they might label you Catholic or retarded. A bore who doesn’t know how to use the penis God gave you. That is, taking care not to mention or even look at the boss’s lover.