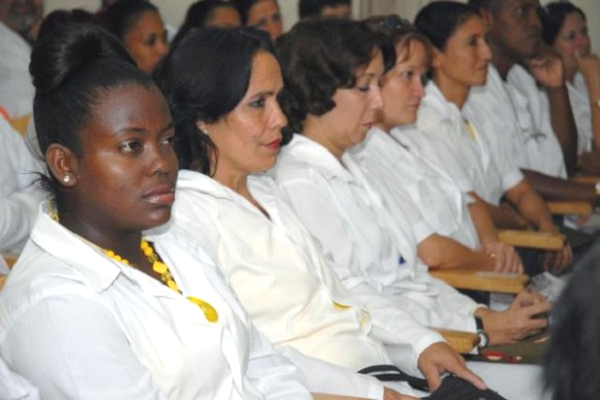 The government is trying, among other measures, to curb hiring of its professionals by foreign clinics

Cubanet, Roberto Jesus Quinones Haces, Guantanamo, 20 April 2015 — The exodus of Cuban health professional does not stop, and the Ministry of Public Health (MINSAP) apparently has decided to act to counter a phenomenon that is damaging domestic medical services but much more the country’s income.

A document attributed to the senior management of MINSAP, adopted in a meeting held in mid-March of this year, has been making the rounds in the e-mail of health professionals in which the sector’s new policy is expressed. This event was confirmed to CubaNet by an official from the Provincial Management of Public Health in Guantanamo, whose identity we do not reveal for obvious reasons.

The document has 18 instructions. The first three are focused on the re-organization of services and the re-location of professionals as a result of the staff review carried out last year.

The other 15 are directed to curbing the exodus of health professionals through private contracts or other avenues and steering the application of the measures in each case.

One of the most controversial, instruction number 4, establishes that Cuban doctors in Angola must be relieved, but without increasing the collaboration with that country, until its authorities stop handing down measures that discourage the hiring of Cuban professional in private clinics or institutions.

Another measure, number 5, directs the withdrawal of the passport, in the airport itself, of professionals who later return from the completion of a mission.

Measures 6, 7 and 8 aim to get the private clinics of other countries to hire Cuban doctors through MINSAP, an agency that claims the right to review the professional’s individual contract, obviously so that the doctors pay the corresponding tax to the Cuban government and in no way receive all the money that is due them from the agreed upon wage.

Rule 12 considers it a serious breach for a health professional to not return to Cuba upon fulfillment of his mission abroad without good cause verified by MINSAP, and it requires final separation from the profession by those who engage in said conduct, with the subsequent withdrawal of the degree.

Meanwhile, Rule 13 orders the creation of records of disqualification for those professionals who violate the established procedures for leaving the country. If any of them repents and returns, Rule 14 directs that they cannot be re-located in their previous workplace but in an inferior status.

Another cage for the army of white coats

Rules 16 and 17 of the document are intended to promote meetings with ambassadors of the countries where Cuban health professionals travel, largely for the purpose of discouraging their being recruited to remain and practice in that country.

The heads of Cuban medical teams and ambassadors have received that same instruction. Besides interfering in the internal affairs of other countries, this shows one of the thus-far-discouraged facets of Cuban medical collaboration, which is none other than exerting pressure over the countries receiving these types of services to make them faithful to the regime’s policy, which is clearly established in instruction number 4 with respect to Angola.

Finally, number 18 establishes a monthly coordination between MINSAP and the Department of Identification, Migration and Foreign Affairs of the Interior Ministry so that it will report to MINSAP on the doctors who leave the country as well as those who have begun proceedings for that purpose, in order to take appropriate measures.

Being a health professional in Cuba, a doubtful advantage

The above measures show the doubtful advantage of being a health professional in Cuba, although the same could be said with respect to other professionals.

Determined to provide the country with qualified personnel, the government never concerned itself with steadily encouraging the efforts of the professionals themselves. That explains their massive exodus to foreign countries and other better paying jobs with the consequential social loss.

At the dawn of the 21st Century, renowned Cuban professionals have been subjected to a financial exploitation that not even the fiercest capitalist would have dared to impose. Paid miserable wages, many times they sign unfair contracts that the government offers for them to work abroad because it is the only chance they have of improving their housing or getting housing, or acquiring a car or having some savings for their retirement.

In doing so, at a sometimes irreversible familial cost, they damage their freedom and self-esteem in service to a government for which they are only a source of income that allows it to continue dominating the people.