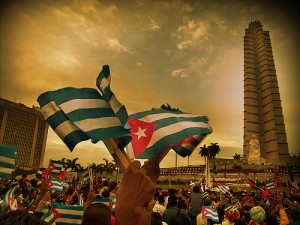 In 52 years of Revolution, Cubans have become used to attending parades and events. Not always spontaneously. The members of rapid response brigades — paramilitary shock troops — are called to hold repudiation rallies and verbal lynchings against opponents, in particular against the Ladies in White.

Two weeks after the military parade in the Plaza de la Revolución on 16 April, Havaneros were called into mobilization again. This time at 7:30 in the morning, for International Workers’ Day, which has been observed for more than a century throughout the world, Cuba included.

Before 1959, the parades were combative and proper symbols of the anniversary were hung, or perhaps workers’ and unions’ demands. Now, since only one central workers’ union exists and other unions have been converted into administrative appendices and nuclei of the Communist Party — the only one permitted — the celebration of May Day has a clear and defined political tone.

It might be enough to read the official convocation: “The workers’ parade will be the expression of the unity of all the people and of its will to contribute to develop the implementation of the Cuban economic model through the strategies in accordance with the 6th Party Congress, and to establish the compromise of supporting and actively participating conscientiously in the transformation that this process demands to guarantee the continuity of socialism and the preservation of our independence and our national sovereignty”.

The cost of living has risen ferociously in the country, but those who parade in Havana and the rest of the provinces won’t be able to complain. Neither will they be able to shout or raise signs demanding raises in their salaries or claiming a series of measures in favor of self-employment. No. Among other political signs, some will certainly demand the liberation of the five Cuban spies condemned to long US prison sentences, and that Washington end its commercial embargo, in effect since 1962.

Despite the closeness to the World Press Freedom Day, on 3 May, to think that on the First of May it should occur to someone on the island to demand free traffic of information or internet for everyone.

In Cuba, one can march. Always and when one keeps to the time and date called by the government, the Party, or the Ministry of the Interior. Under this heading private initiatives are forbidden*.

(*) Recently, the police detained Darsi Ferrer, his wife and three more dissidents, who, outside the Coppelia Ice Cream shop, on the corner of L and 23 in Havana, were stopped while carrying signs demanding they be granted permits to travel overseas.