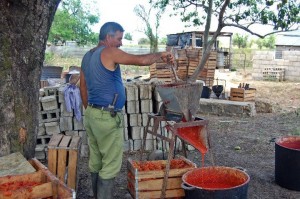 Cuba’s fate will be decided in 10 years. Or less. By that time Fidel Castro, will be 95 years old. If he is still alive then, a nurse will try to feed him with puree or apple compote with a spoon.

His brother Raul, around the same, will turn 90 years old and I don’t think he will have the strength to blow the birthday cake candles. If God’s grace lets them live, they will be two boring grandpas. A piece of Cuban history prostrated in wheelchairs.

In 2021, probably before, those who rule the nation’s destinies would have been adjusting the itinerary on their political sextant. If the ship still being captained by the olive-green entrepreneurs, Cuba will be a mix of a virtual communism and state capitalism enthroned in the principal economic sectors.

Maybe by that time Cuban intelligence will have designed an obedient and nice opposition. And, not to be outdone, they will hold elections every five years. There will be two or three political parties with pompous names that will preach the same, but using different formats.

Of course, the military magnates will have the complete control of the economy and the political life. They will let  private enterprise and will encourage and reward it with lower taxes. And the powerful Cuban-Americans, will be compensated for the expropriated properties during the first years of the revolution.

If by then, the commercial firms such as Bacardi, Fanjul and other millionaires of Cuban origin would prefer to invest and leave aside “those absurd ideas like democracy and human rights,” the doors to doing business in Cuba will be open.

Those annoying political activists and independent journalists who step out of the script will have to  be careful. When a honeymoon with the Florida’s wealthy fellows exists, the embargo will be a relic, and from time to time the United States president will spend his vacation in Varadero, it won’t be necessary to set up political circuses against the dissidents.

The trouble makers will end in a grave. They will be buried three meters under, with a shot in the neck. Like in Mexico or Colombia. Nobody will want to know who killed them.

Cuba is a State in liquidation sale. The subsidies are already being dismantled and the creole mandarins now talk about profits and loss. To work, damn it! It has been said in all assemblies.

On the economy side everything is figured out. The preservation of the planned economy is to appease Fidel Castro, who hates the free market. But there are areas, such as real estate, crude oil extraction or tourism advocating  for mixed enterprises.

Many generals-turned-businessmen, dressed in white guayaberas, will give the welcome speeches at some golf tournaments. The black caddies will return to carry the golf clubs and the cash registers will be ringing with so many stunning greenbacks.

The Mariel seaport will be a goldmine. It will make Miami look small. In the Chinese factories the people will work for two dollars a day. And they will be satisfied. In a State enterprise they would only receive fifty cents of a dollar.

So this, more or less, will be Cuba’s outlook after ten years.

To put in place or not a two-headed system, combining the worst of the capitalism along with the totalitarian society’s repressive brutality, will be left in the hands of a dissidence that must mature and gain political conscience.  Otherwise, they will be blatantly bought with hard currency, in order to get a slice and keep their mouths shut.

The future looks ugly. I may be missing details. But not too many.