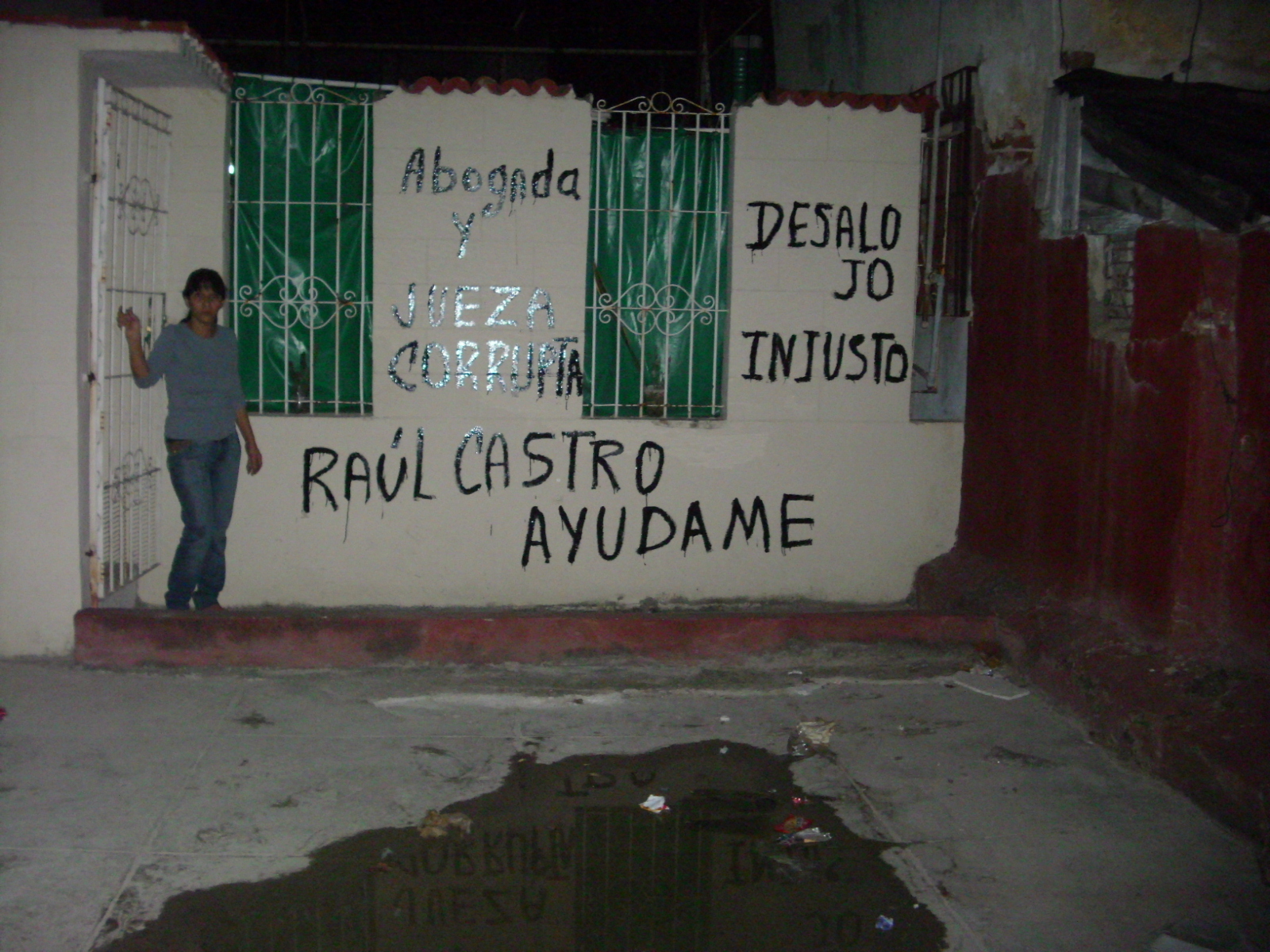 Unfortunately, in Cuba anybody with a Communist Party ID, a title that gives them a substantial amount of power, and personality disorders that will predispose them to abuse their authority, can conspire against any defenseless citizens and strip them of their property. If there are economic or monetary interests involved, these become incentives that speed up such acts.

I found out about the case of Yamile Bargías Hurtado (YBH) in November, and it moved me to write “If it is not rotten, why does it smell bad?.” In it I tactfully tackle a thorny subject of which I do not know all the sides of, as I have not participated in all the hearings nor heard all the plaintiff’s allegations, her defense attorney’s, the affected family’s or any other attorney’s statements. However, as the process to evict Yamile from the apartment that she owns, and into which she moved ten years ago as a result of a house swap with the previous owner, has become traumatic and has extended for five years, it allows us to find out about contradictions, convenient omissions and timely obstructions that stain its adequate transparency and good execution.

Baltazar Toledo Rodriguez was the manager of the building located at 3rd Street, #355, between Paseo and 2nd and was married to Teresa Luisa Rivero Domínguez. It was assigned to them or they assigned it to themselves, but that is irrelevant, a mini-room in a space adjacent to the building’s garage for this reason. Other apartments have garages, one each beneath them, but it seems that no one cared then for them. With the passage of time, the couple created better housing conditions; the apartment got bigger, as expected, with the expansion of the garage and it ended up being a “modest and miniscule apartment” and I place quotation marks in order to emphasize that I speak of a limited space, not a  property that with the years the necessary institutions recognized as legal and made the couple title holders. Upon the death of Toledo Rodriguez in 1998, grandfather of the plaintiff Eleazar Yosvany Rivero Toledo, his wife who was co-owner, updated her status before the Municipal Directory of Housing and the property was awarded to her as only owner. In 2003 Yamile swapped apartments with the widower and remodeled and expanded her new home with enormous efforts and costs in order to create a bedroom for their daughter. She did it all, tells me the plaintiff, applying for the required construction permits and adding the new space to the property title at the corresponding organization: Municipal Directory of Housing in Plaza. While all the construction activity progressed, the litigant who claims the property as “former heir”, was an eyewitness to the renovations, as he regularly visited the home on top of Yamile’s apartment, considered by those affected as the bank of credit of the process, whose aged protagonists have three children abroad and huge desires to obtain the space for their parents. It was not until 2008 that YBH found out that her house was in dispute since 2002 and her house swap was cancelled in 2009. 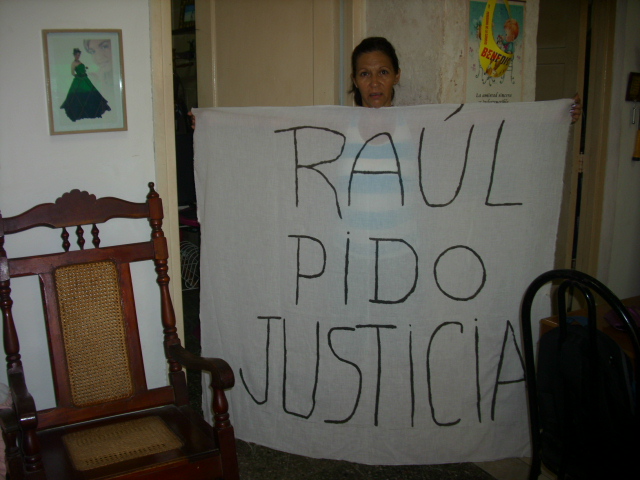 “Raúl, I ask for justice”

It is true that at the time  of the home exchange, and according to his identification card, the plaintiff resided, with his grandfather’s widower.  Some witnesses allege that he tricked her into allowing him to stay and register as a co-inhabitant of the dwelling using as an excuse the fact that he had separated from his wife, and had no place to live. If he did not have where to live why he did not sleep under the same roof as his grandmother? Why did he not go to live with her at the Bahia neighborhood? She was the new property owner after Baltazar Toledo’s death and his heiress by right.

In August, YBH tells me, she painted the banner shown in the image on the right, and carried it to the State Council to ask Cuban President Raul Castro to intercede in the injustice against her! She was arrested in the vicinity of the Plaza of the revolution, they removed the rough banner and took her to a police station in which she was kept for several hours.

In November of 2012, due to the silence of the “deft” national authorities which she had approached, and their immovability, YBH made her cause public and started writing letters to international personalities and institutions. At the same time she approached me and other members of the civil society in Cuba. However the despair and insecurity she has experienced during  these 5 years of unjust and undeserved conflict, have not diminish her sympathy for the system led by the younger of the Castro brothers although she hasn’t received an answer to her letters from their offices.

On December 6,2012 a hearing was scheduled to hear all parties, and to “make it a transparent process.” After the supreme court had already handed down its ruling and the threat of eviction hung over the stability of two families?? I write transparent in bold letters because the close relationship between the plaintiff’s lawyer, the ruling judge and the family that lives upstairs, taints with suspicion any unprejudiced attitude that one would like to have about the case. At the hearing she was told that eviction was to be carried out. Then, why the hearing? To calm things down?

Yamilé withdrew from that circus that ironically sought to legitimize the crooked attitudes of some lawyers. Neither then nor now, was she the object of any reprisal or much less a fine for being in contempt of court for leaving the court without being authorized, and without finishing that judicial theater. Some experts consulted on the case, were scandalized over so much arbitrariness, mishandling, coercion, opportune omissions and convenient obstructions which have stained the safekeeping of the rights of the living and the dead.

The following days brought them closer to despair and helplessness to what in Cuba they call, using a legal euphemism, “forced extraction” to minimize the impact that such methods could have on society. The terminology is made up to avoid the comparison with evictions in other countries — used by Cuban authorities in political campaigns — and to differentiate them from those of which the new regime has historically accused the previous one in their overly exploited propaganda. The one when farmers were evicted from their hovels with all their belongings and families.  Beyond any legal and professional definitions, this legal figure is the sum of all manipulations.

Convinced that the lawsuit would go nowhere, Teresa Rivero Dominguez’s heirs, allowed things to follow their course thinking that it was just a matter of time until the laws were applied correctly.  However, seeing that the courts appeared biased against them and Yamile, and that they had ruled against her, they decided to take action to avoid any further injustice.

In April of 2012, the heirs from the Bahia neighborhood hired a legal professional to begin a process called “The Inheritance Flow” to determine who has rights over the house left behind by the late Rivero Dominguez. It is possible that Eleazar Yosvany may have rights over the property, and be entitled to monetary compensation, but not to the property itself.  The lawyer they hired, violated their contract by transferring the case to another lawyer who presented her case on December 20th, 2012.  For the defendants, this was just another link in the chain of obstacles that prove fraud in the proceedings.  Why does it look like someone has ordered to stop the parallel processed initiated by the heirs? Naturally, if it is demonstrated that Eleazar Yosvany has no rights over the dwelling, the case no longer makes sense, and everything goes back to normal.

The Day of the Ultimatum 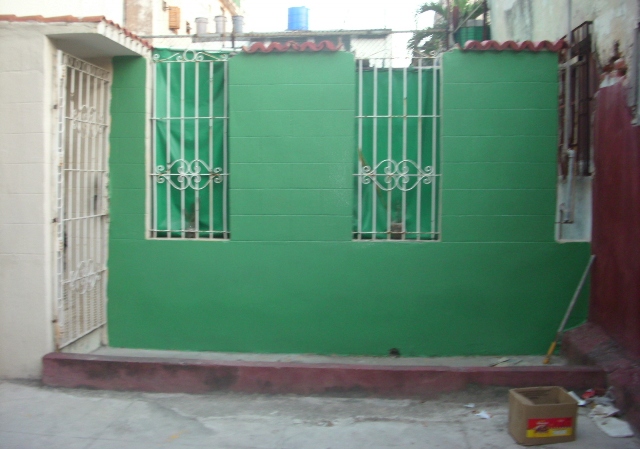 After five years of trying to rob two families of their homes, and after the Supreme Court ruling against YBH, the authorities announced that they would carry out the eviction of Yamile, her daughter and the family from the Bahia neighborhood on February 5th.  The authorities showed up in front of Bargia Hurtado’s house that now shown a message painted on the wall accusing of corruption all the lawyers involved, and asked the — in this case — deaf president of Cuba.

A local apparatchik sent two workers to pain the wall to cover the graffiti that had no anti-government message at all (and even if it did, it is her right to paint it) but in support of justice for the two families. Who sent them?  Why sabotage the work and time invested in creating it, not to mention the cost of the paint that YBH’s family had bought with their own resources?

In the same fashion, the lawyers accused of corruption and present during the “forced extraction,” went upstairs to the home of the ones thought to be moving (green) papers to make a move of which Eleazar Yosvany is only the facilitating pawn. If there were any doubts about their link, that day their relationship with the upstairs neighbors (the lady of the house came out in defense of the lawyers) was made evident. The incredibly passive attitudes of the attorneys were even more suspicious since they did not react at all to the accusations of corruption from those involved. Why?

The interested parties who live upstairs are elderly, but have money and time to think about expanding their dwelling. They already did by taking over the roof, and now they want YBH’s, and in time who knows what else they will want. In their favor they have a letter that states that the old man fought in Sierra Maestra for the revolution. Although no one knows if it is real or not, it empowers them to do harm to others, scare them and trample their rights.

For a while now, YBH and her daughter who studies at university, wonder if the Cuban Lady Justice uses her scale to weigh wads of cash and if she covers her eyes to avoid looking at the problem that affects them.  The two of them sleep, but never really rest, keeping an eye open and an ear alert to try to prevent the authorities breaking into their place at night, as if it were “an organized crime action,” to evict them under cover of night, and without an audience. It is not a baseless fear since they have been told that in similar situations a committee arrives with a locksmith, break into the house even if the owner is not in, put the furniture on a truck, and commit the abuse with impunity.

The malpractice of some of the jurists involved in this case has been denounced in multiple collateral lawsuits and complaints, and there have been calls for others authorities to investigate and intervene to no avail.  The sword of eviction continues to hang over the security and the emotional and physical stability of two Cuban families, and over the prestige and respectability of the laws and civil legal proceedings in Cuba.