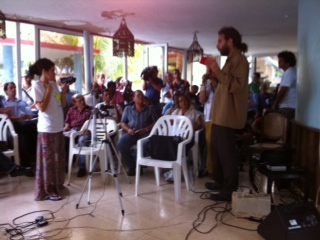 It must seem incredible to have a technology Festival without access to the Internet. This didn’t weaken the perception of breathing fresh air in Cuba. Metamorphosing, formatting, restarting, because we are getting old and the speed at which the world moves seems inconsistent with this sluggish reality.

Although I couldn’t sit down and attend all the workshops, because I was busy with the most important occupation of my life which consists in following the adventures of my little daughter and other children who also attended with their parents, still without a doubt I was able to take advantage of the Festival. I do not even know how to tweet and perhaps when the day comes that I have a cellphone, so very expensive in Cuba, someone will have to explain to me how to receive calls. It hurts me to say it: I am far from accessing the digital version of my life.

Nevertheless, attending the CLICK Festival put me ahead of analog Lili, and many steps ahead of the formerly terrified Lili… like the one who was too late to shake hands with Laura Pollán.

And the threats have rained down; the first day an editorial in Cubadebate.cu demonstrated the criminal mentality that only a Communist Revolution and a caudillo with truncated ideology could produce in some people. They have tried to artificially fabricate a state of opinion where “the people” are shown as outraged about a technology Festival taking place in Cuba to serve the public, independent of the State, organized by a resistant Civil Society that aspires to connect the Island and those of us who live here with the contemporary spirit that does not passively stand by as the political, financial or religious power continues to be concentrated in a caste, corporation or State; a civil society that in many ways pleads that citizens do not have to give up their freedom before any kind of power, set off by its personal mystique, the only path to the health and happiness of a society.

There were jeeps with orange license plates (the color of private plates — trying to look like something they’re not) at the entrance to the SATS space where the Festival was held, with KGB-style men writing and looking through the windshields at a reality they did not understand or even pretend to understand. There has been no foreign government supporting our need to acquire a conscience and freedom, because the sovereignty and independence of Cuba (to quote from the Cubadebate editorial) is not in danger from or threatened by a foreign government, but by a mafioso and criminal family that usurped power in Cuba more than 50 years ago: beasts, the Antichrist, who never stop lying to justify their filthy deeds. I repeat myself because this reality is reiterated in my life.

I had the occasion to met several people I’ve admired for a long time, and one in particular who had greatly impressed me, the boy from the Patriotic Union of Cuba (UNPACU), Ányer Antonio Blanco (in the photo with me, below). Now 24, he was imprisoned for political reasons in the Castro regime’s cells from the time he was 18 until just this past January, resisting years of physical and psychological tortures.

He said words to me I will not forget about the inner strength he believes we all have to resist those who want to destroy and demoralize us. It has been a long time since I’ve seen a young man of such character and so much spiritual strength, he is probably the only one of his generation who has seen such horror without letting himself give in before the violence of the criminals from the Ministry of the Interior (MININT).

His testimony and that of many others I’ve met speak of the sadism practiced in Cuba in the cells by the guards and MININT officials themselves. I thank God that a brother is alive and well, despite what he has had to live through at such a young age. These details of the story of a Cuban citizen, barely a teenager, in political prison have never been published in Cubadebate. Cubadebate is an organ of the State dictatorship in Cuba, an extension on the internet of the newspaper Granma, that appears to be open to dialog and betrays such a great intolerance and fanatical defense of a political “religion” that no one in Cuban believes them, though many still fear them.

The quoted Cuban website, run by the most repulsive officialdom, is not a civil space nor an independent or sovereign one.  How dare they?

The festival has been a success, someday this little burst of light that can connect people around the world will inevitably connect, first of all, us Cubans who have a lot of mental work to do to cleanse our minds of so much hatred that our history has cultivated in Cubans, which has been primarily psychological.

It is always in retrospect that it chills my blood and upsets me to think of our children running around and amusing themselves in the same space where State Security boasts of infiltrating it agents, because the door was closed to no one, and it upsets me.

Brutality destroys the fabric that has taken centuries to bring to light and materialize in a man and a woman who speak from the heart, without political or ideological commitment, without commitment to power. This breed of security agents and dictators will be left behind in what emerges in the spirit of these times which is freedom with all the risks that implies, but before descending into hell which they should never leave, the dictators and their henchmen are disposed to causing damage and someone should feel the responsibility to stop them.

To exercise our political, cultural, and economic rights scandalizes the dictators who must be afraid because they did not get power through the freely expressed will of the citizens whom they call “the people” betraying this old and dangerous mentality prone to political crimes. But with a CLICK multiplied in every Cuban, in Cuba as well the Spring can come.