Note from the “blog manager”: Laritza contributes to two blogs which we consolidate into one on this English translation website. This post is very similar to the August 22 post, “The Scene is Indeed Confusing” — they are from the two different blogs — and we have decided to publish it here as well. 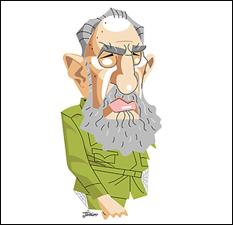 Before the formation of the current Council of State on February 25, 2008, Fidel Castro resigned his posts in that body. In a public address he explained that the state of his health no longer allowed him to hold “a responsibility requiring more mobility and dedication than I was physically able to offer.”

In mid July of 2010, after several months of absence from the media, Fidel Castro resurfaced noticeably recuperated. The comments were quick to follow. Does he intend to reclaim his duties and return to power?

It’s speculated that he is attempting a “slap-on-the-hand coup” against Raúl Castro, after having relinquished the country’s leadership to him four years ago for health reasons. His younger brother respects him, too much for a man with the responsibilities of running a nation.

I also don’t doubt that Fidel Castro misses his position as thee number one on the island. But time doesn’t pass for the sake of passing. The current political scene doesn’t allow for reversal. Any action could be dangerous. A 20% voter abstention from the polls in the recent elections reaffirms that popular discontent is running out of control.

Someone asked me, if during this past extraordinary session, the National Assembly could have agreed to a new announcement calling for elections appointing the elder Castro as Head of State. From a legal standpoint, the idea seems ridiculous.

First, a compelling reason is lacking to justify a change in the country’s leadership. Second, if said reason should appear, it would reaffirm suspicions of a power struggle. However, in Cuba anything can happen.

It’s certain, that figure of the “compañero who reflects”* raises doubts as to who truly governs and decides in this country. However, his aged image and everything that implies — incoherence and mental lapses — show him as inept for leadership. The perception broadens. I don’t think the majority of the population would endorse his return, although I don’t doubt they would impose it either.

There is no doubt, the messiah sends us a sly little message: “Careful, I’m still in the game.” He’s trying to gain some space among the ambitious youth who wish to gain trust and positions in the highest spheres of power. But I suspect the interests of other characters hidden behind his figure.

Of course, his sudden appearance is related to the unprecedented dialogue that led to the release of the political prisoners of 2003’s “Black Spring”. The doubt arises as to whether the Cuban government will truly undertake measures to improve the human rights situation on the island, deserving a change in policy from the European Union and Washington. Incidentally, the reappearance of the ex-President questions Raúl’s capacity to make decisions and carry out essential changes within the system.

The struggles for power are unseen but they are felt. The internal performance of the repressive entities doesn’t always follow the same pattern. On one hand they repress — arbitrary detentions and intimidation of dissidents; on the other hand, they display a tolerance that begs the question: who’s giving orders? The scene is indeed confusing.

*Translator’s Note: “compañero who reflects,” is a reference to Fidel Castro’s regular column in the Cuban press, entitled “The Reflections of Compañero Fidel,” with the simple title of “compañero” — or comrade — intended to carry its own meaning.