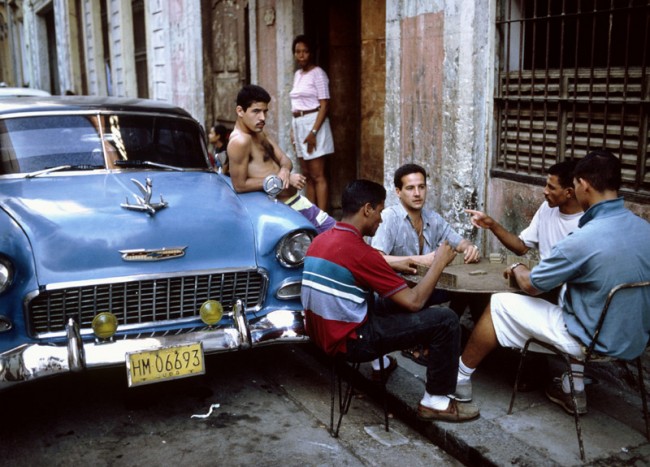 The other crisis that exists in Cuba, besides the political and economic one, is stationary and comes from our language. We already know that money is scarce and that food is scarce. We live in upset, because we live under a government that controls our lives as if they were our parents. A huge share of Cubans dream of futures in Miami, Rome, or Madrid.

Very well, I understand all of that. But I can’t wrap my head around why we daily speak an incomplete and fast-paced dialect, which only we nationals comprehend. An example of this current “language” spoken on the island is the following dialogue.

Any random morning. Two friends meet up at any park in Central Havana.

– Everythin’ and nothin’, my friend.

– I’m looking for a fool to throw in his face the couple of imported pedals my dad sent me, I don’t have a dime. I’m going to sell them for 30 dollars so I can hook up with that bitch from the neighborhood, she’s driving me crazy.

The homey, with his pants hanging well below his waist and showing off his Nike underwear, replies:

– That bitch pretends to be shy. If I don’t show her the money she won’t even move her ass, once I put my dick in her mouth and afterwards I was wasted and broke and she just left me, every time I think about it, I feel like breaking her in half like a pencil.

A policeman with an evil face and a German Shepherd comes near. The two friends decide to leave.

He gives his friend a kiss on the face and reminds him:

– Please do not pretend to be the “sugar daddy” (the one who pays) with that girl, that it is not good, rumors say that she’s no good in bed after all.

– Got it, responds the homey.

Even for me, who is bent on trying to understand the ins and outs of the Havana underground world, it sometimes gets confusing and I don’t understand such language.

For Cubans who have been living outside of the island for years, it will be a challenge to try to translate this conversation.

The hell with Spanish. It’s barely spoken in Havana. We speak gibberish.