HAVANA, Cuba, January, www.cubanet.org — If the caviar leftists from abroad saw what their eyes can see in Cuba, and not only what they want to see, a walk through Old Havana would suffice for them to discover the impassable class wall that the regime has raised between them and our common people.  They do not even need to cover all the historic town.  It will be sufficient for them to walk two or three blocks along Obispo.

As well as the most prominent tourist corridor, this street is the most populous on the Island.  In no other place do foreign visitors and humble Cubans converge in such a large scale and physically close way.  It seems obvious that the regime, through its viceroyalty in Old Havana, is taking advantage of the history of Obispo as a very busy commercial artery, in order to use it as a propaganda showcase, set aside to disguise the shameful ghetto that common citizens suffer from their status as zoo animals who are barely observed at a distance by visitors.

But it happens that here too the habitual clumsiness of our bosses surfaces. Being the point of closest proximity between Habaneros and visitors, Obispo offers an unequaled occasion to test the abyss the separates them.

Along its twelve blocks, from the banks of the bay to Monserrate, besides being the Cuban street with the greatest number of police spies, it is a unique commercial boulevard. Nevertheless, almost all of its stores sell in foreign currencies. So that the role of the Habaneros is to serve as decorations, placing themselves picturesquely at the site, going to look or looking at those who look, but without being able to touch, because nothing is within reach of their pockets. Also, in some cases, they go with the hope of getting something from the tourists.

On Obispo there are 39 stores, but none sells in the national currency. There are a dozen restaurants, of which only one accepts the money that Habaneros are commonly paid on their jobs. There are dozens of bars, cafeterias, trinkets, kiosks, almost all dedicated to commerce in “hard currency.” There are barely any self-employed and some small state shops where one can buy (in Cuban pesos) light food of the worst quality.

Beggars and fighters for pesos

On the corner of Havana there is a type of market and dining room for poor people (the only one in Obispo), which is an authentic dump, dark, dirty, with an interior atmosphere of oppressive misery.  On its facade they have written a kind of ad that is a coarse joke, as much for its consumers as for the tourists:  “Bargains and services of excellence.  All in national currency.”

Only the beggars and fighters for pesos exceed the number of police and tourists on this historic street, which dates from the 16th century, the first in Havana to be paved and also the pioneer in street lighting.  In the current number 462, between Villegas and Aguacate, there lived the illustrious philosopher and priest Felix Varela, in a house where today a small library and a souvenir kiosk for tourists share space.  Also celebrities like Ernest Hemingway, who wrote part of his novel For Whom the Bell Tolls in the Ambos Mundos hotel (Obispo and Mercaderes), spent the night here.

The center of what was called “the little Habanero Wall Street,” Obispo conserves some of its former headquarters, like the current building of the Ministry of Finances and Prices, from 1907, considered the city’s first “skyscraper;” or that in which the first Spanish-American photographic studio was inaugurated (no. 257, between Cuban and Aguiar).  Other historic buildings of this street are currently museums:  the numismatic, the mural painting, natural sciences, the goldsmith, and even the museum of the CDR, which is all a monument to hate.

Especially popular since the 19th century for its commercial establishments, fashion houses, boutiques, confectioners, renowned pharmacies, restaurants, bars, hotels, cafes…  Obispo has not stopped being the place most frequented by Havana residents.  It’s just that today, by the work and grace of the viceroyalty of Old Havana, far from being what it was, it has become a street of infamy. 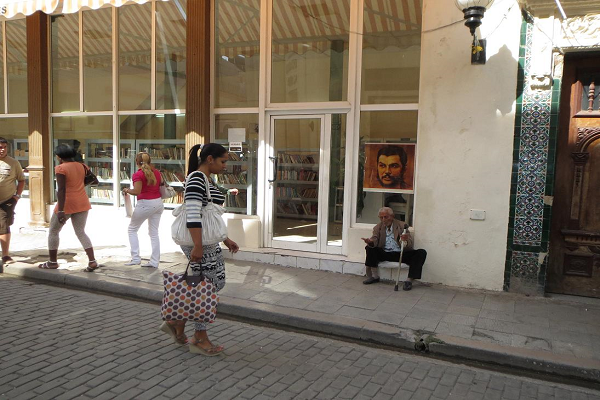 Cradle of the Daiquiri, at the entrance of Obispo

Very politicized the sale of books in the biggest open air bookstore, Plaza de Armas, at the end of the street.

In Obispo also there are “human statues.”

Obispo Street is full of police.

The first skyscraper of Cuba never got to scrape the sky. The only shop in Obispo for common Habaneros.

Note:  The books of this author can be acquired at the following addresses:  http://www.amazon.com/-/e/B003DYC1R0 and www.plazacontemporaneos.com