A few days ago a lady who has a seat on the Committee for the Defense of the Revolution (CDR) knocked on my door. I thought it was a mistake or forgetfulness that brought her to our door, as we haven’t been members of the CDR for nearly a decade. But the thin woman was not, this time, bringing one of those notices with a martial tone calling people to attend a meeting or serve night guard duty. In this case, she came to our door for a completely different reason.

She took from her bag a small blue booklet and announced that on Saturday, September 8, there would be processions and masses for the Virgin of Charity of Cobre in several churches in Havana. I couldn’t help but wonder that the sharp turns life takes. Just a few years ago the lady in question was a fierce atheist who identified religion with the “counterrevolution,” and now she invites us to a Catholic pilgrimage.

I asked her if handing out the flyers was a task assigned by the CDR and to my utter amazement she assured me, “No, this is my idea.” Incredible! The neighbor who from her balcony watched for years everyone who came into the building with a bag or with a new friend, now invokes the initiative of each person as something to respect. Well, in the end the contrast makes me happy. I prefer this new attitude over the previous one, but I can’t stop wondering that happened.

Because in this year of 2012 we are celebrating the 400th anniversary of the appearance of the image of the Virgin of Charity, our patron saint. Cachita, as she is popularly known, is greatly revered throughout the whole Island and has transcended the religious sphere to become an emblem of Cuban identify.

She is also syncretized in Santeria with the deity known as Oshun. She is associated with a number of attributed that come from her Catholic image, such as her golden cloak, the three men in the boat that appear at her feet in her pictures, and the baby boy she cradles in her arms. But she is also linked to elements such as flattery, femininity, love and sensual dances, characteristics that come from her counterpart in the Yoruba religion. On an island that is a spicy stew of cultures… our patron could be nothing less.

At the dawn of the seventeenth century a simple image of the Virgin of Charity was found in the eastern Bay of Nipe. Two man and a teenager all named Juan (the three Jauns) found her floating in its waters. So Cachita, rescued from the waves by those arms, came to become the Mary of a people who centuries later would launch themselves on the Straits of Florida in rafts, doors converted into boats, and trucks made airtight so they would float.

The Mambisa Virgin, as we call her, also stood by those who, at the blade of a machete, demanded independence from Spain, and she now adorns the altars of compatriots scattered across the globe. She has her hermitage in Miami, like her sanctuary in Santiago de Cuba… and even innumerable altars in apartments in Madrid… Cachita was our first rafter, only she didn’t escape, she arrived, she did not want to reach other horizons, rather she wanted to stay here forever.

Her main temple, located in Santiago de Cuba, is known as El Cobre — Copper — for its proximity to the deposits of that mineral. In the entry hall of the busy Church — the Chapel of Miracles — people have deposited every kind of offering: tresses of hair dedicated by girls engaged to be married to some foreigner alternate with the shoes of babies given up for lost by science but who managed to survive. Bracelets of the 26 of July Movement brought there by rebels who once wore scapulars, and later banned them. In one corner a poster recalls the dissidents imprisoned during the Black Spring of 2003. Only under Cachita’s mantle can such plurality coexist. 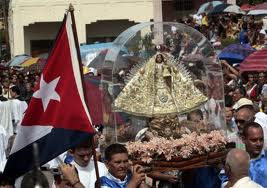 The Sanctuary of El Cobre is filled everyday, with lifelong believers and those who barely know how to say the Our Father. Many of those who pretended to be anti-religious when it was an ideological sin to have the Sacred Heart of Jesus in your living room, now are confessed Catholics, Santeros, Jehovah’s Witnesses or Seventh Day Adventists.

This Cuban coming out runs a peculiar and surprising course, ranging from agnosticism to faith; traveling from doubt to belief. Crucifixes are no longer hidden under shirts and the altars of the saints are on public view in the living rooms of thousands of houses.

The custom of baptizing children has returned, after several generations that never received this sacrament. Church weddings are back in style and it’s not uncommon in hospitals to see the administration of last rites. Catechism classes are full of children whose parents had to learn in school that “religion is the opiate of the people.” Our national history seems to have come full circle, closing a cycle of rifles to begin another of rosaries.

And not only the religion, but also the Church as an institution has gained ground in our society in recent years. It has achieved, among other gains, the ability to open a new seminary for training priests. Catholic masses are aired on national television on certain ceremonial dates, and the political discourse itself has shed the old anti-religious slogans.

Even my fundamentalist neighbor, Communist Party member and an active member of the CDRs, has returned to the faith. She no longer calls us to perform “voluntary labor” for the Revolution, but rather calls us to Mass. She no longer calls me “comrade” but rather “sister.” And to top it off she has substituted for the picture of a uniformed Fidel she kept in her dining room, an image of Cachita dressed in her golden cloak, and at the feet of the Virgin are three men on a raft, watching the whole time.