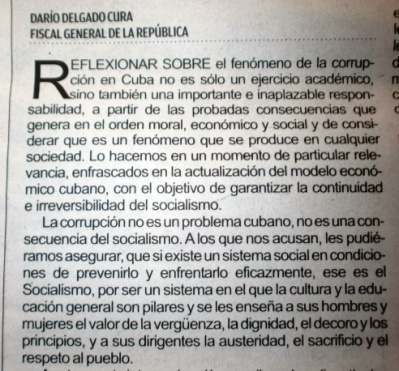 Reflecting on the phenomenon of corruption in Cuba is not just an academic exercise, but also an important and unavoidable responsibility, given the proved consequences on the moral, economic and social order it generates, and considering that it is a phenomenon produced in any society. It has particular relevance to us at this time, as we are immersed in the update of the Cuban economic model with the objective of guaranteeing the continuity and irreversibility of socialism.

Corruption is not a Cuban problem, nor is it a consequence of socialism. To those who accuse us, we can assure them, that if the conditions to prevent it and effectively face it exist in a social system, that system is Socialism, because it is a system in which culture and general education are pillars and it teaches its men and women the value of shame, dignity, decorum and the principles, and to its leaders austerity, sacrifice and respect for the people.

Some time ago, a friend forwarded me a text referring to an experiment at Stanford University. Two identical cars were left in very different urban quarters. The car in the poor neighborhood was vandalized in less than a week while the car in the rich neighborhood remained intact. The experiment then went further: they broke a window on the untouched car. Very quickly this car ran the same fate as the other.

It is the sad truth that this experiment in social psychology was not known by the Attorney General of the Republic as was demonstrated in his participation in the recently concluded international meeting on corruption that took place in Havana. Although fragments were published in the national news, this participation was destined for a foreign audience, without a doubt ignorant of the state of national corruption.

Corruption was a thing of governments predating the revolution in 1959. But now the Attorney General clarifies to me that no, it is an inherent phenomenon in any society, and that we are at an advantage with respect to other societies in combating it. From a sidelong glance, one can blame the Embargo. I don’t see the advantage in a country where the elite enjoy great privileges without paying for them. I don’t see the advantage in a country where an individual can embezzle millions, many individuals have been turned into embezzlers of no importance, and citizens receive stolen goods daily. It is economic bleeding and a political failure.

In Cuba there are many broken windows.