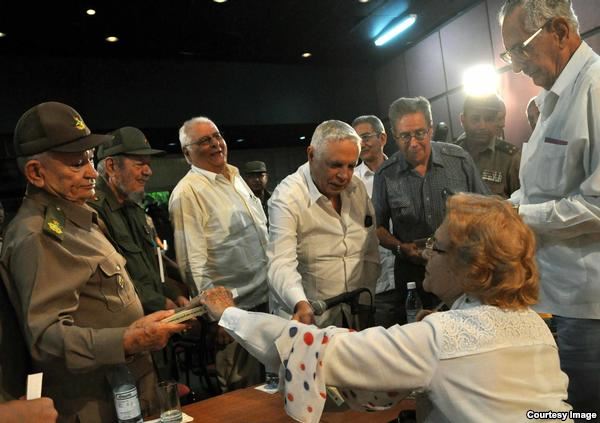 Over-fulfilling the goals of the books programmed to be delivered to the printer, now they’re regulating the presence of the second edition of “History of a Liberator, 1952-1958″ in all the independent book stalls, libraries, whether they’re provincial, scholastic, universities and even childcare centers, bookstores and Cuban consulates abroad.

The reason: Ex-president Fidel Castro edited the preface of this sleep-inducing volume that, boring as a funeral, was written by Georgina Leyva Pagán, the wife and life companion of Julio Camacho Aguilera, a member of the Central Committee of the Party and octogenarian constituent of the so-called Rebel Army, whom many people from Santiago surely remember for his inefficient management as first secretary of the party in Santiago de Cuba, between 1985 and 1987, as much as the fact that he generated a contagious conga popular in the teasing style that said, “Ay Camacho, Camacho, we are drunk all the time”.

Such an epic reference book isn’t an analytical study (or auto-analytical) about the harmful consequences that the indiscriminate use of alcohol causes to the intellectual health of a state official. It’s a selective compendium and testimony in which, scarcely separating guilt and innocence, emerges a series of data that with extraordinary invention, stained with something of imagination, permits the reader to confuse once again the spirit of that group of men who decided to twist the economic, political and social direction of our Caribbean island in an evil direction.

With theatrical gestures, like some impressive disciple of Bertolt Brecht or Konstantín Stanislavski, the publisher of such an ominous tome didn’t read the fragments of the same but centered her attention on the ceremonial torch of an inevitable preface. “Gina, in her book, helped me to remember and understand with more precision the thinking that propelled me in those intense years I lived, although, yes, I’m aware that more than a preface I’m writing a chapter of history.”

Anyone could predict what would happen later. The ex-leader and convalescent, but still powerful preface-writer, usurped with grotesque impertinence the leadership of the author, who, trembling, could only conclude, “The Commander-in-Chief, with his prologue, saw the long view of my humble book.” And naturally, the surrounding biodiversity, with its habitual dose of consideration and drama, applauded.

It was no surprise that the launching of the deafening preface, since the book passed to a second level, was attended by José Ramón (El gallego) Fernández, the ex-minister of education and immodest professional wreck, José Ramón Balaguer, an excellent practitioner of karate, but a man skilled in measuring the pressure of national politicking; and Guillermo García Frías, who in reality, owing to his constant lack of literary receptivity, no one knows even what he’s doing in a bookstore, which he proved by serious cracks in his strategy of control.

Perhaps Guillermo only was practicing his usual quiet subversion.

Also present were Miguel Barnet, Abel Prieto, Rafael Bernal and other exploiters who, captive of a useless sytem, in order to coexist at the margin of popular necessity, opt for pretending and/or forming part of that great herd of sheep who obey the voice of the shepherd, even when he is absent.