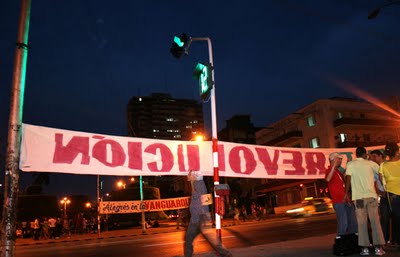 THE NIGHT OF THE BOOKS

That propagandist title has always seemed a little terrifying to me: The Night of the Books…

It sounds as if the sun had set for books, as if brightness and clarity had disappeared, as if we had come across literary darkness and the letters had to wait sleepless for the light to hit them again. Merd Licht…

The first of July there will be another one of those parties through the course and bore of 23rd Street, in El Vedado of Havana. Anything else that happens on that Friday the 1st (although right now I can’t think of anything important), will be left on the shadows of the already shady Night of the Books.

I remember a scene in the University Student Federation (FEU) House, the usual chaos to buy some culture, chaos that seems so vain to me. I also remember a quarrel among the poets of Café G and 23 and the cooks in the place, who were determined to throw them out because they didn’t spend one dirty penny while they occupied the tables with the feast of their post-reading. I remember kaloied flags and fabric posters. Learned devils and ex-presidents of bookish institutes. Little plastic chairs (the dissidence and the official side share the fragility of legs that break very easily). Snacks. Poses. Everyone wants to be considered an author (Cuban literature is soporific to the point of being unbearable). But, I’m sorry; I better stop talking. It sounds like a resentful paragraph, but it’s not. It’s a post that doesn’t really know where it’s going. So don’t even look for yourself; typing your name here isn’t worth it.

One of those Fridays of the world, 6th day of the 7th month, I walked so sadly that I thought I wouldn’t survive the summer (year 7). The Night of Orlando Luis. A friend passed me by in the street by the AIN (that blue agency with a smell of Coppelia — the ice cream place) and walked past me because he did not recognize me. Then he turned around, and it was he who almost started to cry a river (in the 7 Seas): he told me my features were disfigured by anguish, that I was no longer myself. But then I remembered that exactly that was what José Lezama Lima told Lorenzo García Vega* on another night without a night, though a republican night. And the parody made me feel better despite the impossible weight on my cheekbones and sternum.

Next Friday, 1st of July of 2011, Year of No One in Cuba Cares, at 4 in the afternoon, to give a random example, I will walk again among the packed kiosks, looking without being able to decide what to buy (I haven’t bought a book in months; I haven’t read one in years). I will be whistling, perhaps mimicking the birds, or I will spend my time filming the suspect security agents that always swarm cross-dressed as civilians in those days of massive crowding. I might buy a beer, a Bucanero (every day they taste less like Bucaneros) or I might try to seduce a pretty, young emo girl from the post-presidential parks that reach down to the sea by G Street.

If I fail, I will go to 23 and 12, confusing myself among the anonymous moviegoers in any given erotic cycle presented without much pathos by Frank Padrón (why do I have to mention anyone in my posts?). If I succeed, if she picks the daisy petal that says Yes, I will take her where no one sees us, where the Chinese cameras of national security don’t reach, where the spy coverage of Cubacel cannot betray our desire, where language is free and not ritual, to an arid territory where the Suzukis of the securitycrats run out of their faithful fuel; there, where I can ingeniously invent to her the twenty-some years of difference that I will surely have on her (no one I can love now in Cuba was born in 1971).

I am sure my tale will sound better to a beautiful emo of limp hairstyle and eyes hollowed by black make up. Better than all that Cuban shiterature that each first Friday of July sets down among more and more books.