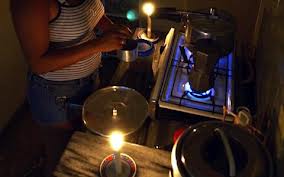 SANTA CLARA, Cuba, October 9, 2013, Yoel Espinosa Medrano / www.cubanet.org.- Blackouts of up to ten hours a day have been seriously affecting residents in the province of Villa Clara for several weeks now. Electricity is the main choice for cooking.

Last week in Santa Clara about 200 people in the Condado neighborhood went out into the street at night in front of their homes and launched a spontaneous “pot banging protest.” Fifteen minutes later electricity was restored.

“I do not know what is happening at the Electric Company, the blackouts are more prolonged and continuous, they have three different circuits and they aren’t making repairs on any of them or maintaining the power lines, but there’s no power between 8:00 in the morning and 6:00 in the evening,” said Guillermo del Sol Perez, a resident of 3rd Street and Circunvalación in the Brisas del Oeste neighborhood in Santa Clara.

Utility officials announce the daily blackouts on the local radio, saying that the service is down for maintenance. They also interrupt the service intermittently for periods of 30-60 minutes in the morning or evening hours.

In the offices of the Commercial Department of the Electric Company, the damage to domestic equipment reportedly exceeds two thousand, because of service irregularities, according to a worker who requested anonymity.

“This is the worst, they turn off the power in the early morning and don’t turn it on again until dusk; the most affected are those of us with children crying from hunger and we have no way to heat even a glass of milk,” said Dania Conception mother of two children living on 1st Street in the La Vigia neighborhood, also in the provincial capital.

In most nuclear families, accounting for the number of members, they are given an emergency fuel reserve. Those who receive liquid gas are allowed 20 kg per 12 months, and for the rest they receive five liters of alcohol and some 15 liters of kerosene for the same period, through the ration book.

The blackouts paralyze work, state and private, as well as the preparation of snacks, lunch and dinner for thousands of students in regular schools and boarding schools.