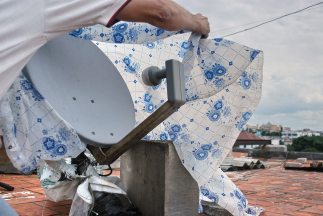 Migdalia and Ramon can’t watch the afternoon sopa opera since the State inspectors confiscated the antenna in the middle of February.

Migdalia Suarez Estevez and Ramon, a couple of retirees, thanks to the efforts of their two children living in the U.S., spend their leisure time watching foreign programs, especially the afternoon soap operas on TV51, Florida.

“Cuban TV is boring and tedious, at least I entertain myself with the cable and I spend less time missing my loved ones,” said the lady of 64, to referring to her children and a sister, living in the northern country.

In mid-February, inspectors from the Ministry of Information and Communications (MIC), raided Párraga seeking satellite dishes in a neighborhood of Arroyo Naranjo municipality, on the outskirts of Havana.

In 2000, MIC administratively penalized the possession and installation of satellite dishes, the reception and distribution of foreign television programs. “From broadcasts on illegally distributed television, destabilizing and interventionist messages arrive daily,” said the newspaper Granma, in its issue of January 27.

In the report, “Chain of illegalities,” the newspaper, official organ of the ruling Communist Party, warned that people “will remain vigilant to those who insist on violating the existing legislation.” However, foreign TV programs, are in strong demand on the black market.

Prices for the installation of antennas are between 300 and 400 convertible pesos, for the distribution of the service it costs between 10 and 15 CUC per month. Terminal equipment for receiving signals from satellite television became essential for the illegal business, since the United States converted digital television signals in 2009.

Migdalia was taking a nap at noon, when she heard a noise in the ceiling. Shee got up, startled. When she opened the door, a man already on the property asked, “Where is it?” Without waiting for an answer he entered the house.

He searched the room. In the corners, lying on the floor and looking under the bed. Until, under the TV, covered with a cloth, he found satellite connection equipment. Ms. Estevez was speechless and almost on the verge of a nervous breakdown. When she reacted and he had already imposed a fine of 10 thousand pesos.

“Cuba uses modern technical means to confront any kind of illegality,” Granma said in a note published on March 8, referring to the use of electronics. A day before the national television demonized the use of antennas in their documentary series “The Reasons of Cuba.”

“To mount satellite stations, you need a license,” Mr. Carlos Martinez, Director General of Control and Supervision Agency (ACS) of the MIC, explained to the daily paper. He also reported that it is mandatory to obtain permission issued by the AC, according to certain technical rules.

The ACS works to confiscate illegal stations. The company is responsible for the control of computer networks and systems of national and international media operating in the country.

A part of “face” of technology acquired for the island, they also have a “body of state inspectors,” who “close the loop on the violations,” the newspaper reported. “Cuba is not against the use of technology, to the contrary … but it requires order, control,” said the only national newspaper.

“They took me by surprise, I thought they were robbers and almost died of fright,” Mrs. Estevez tried to explain to husband, referring to inspectors from the MIC, as she held out the fine. For the Suarez Estevez marriage, however, the biggest regret is missing the afternoon soap opera on TV51.