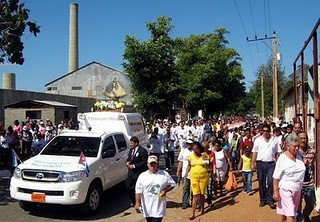 The image of Mary, mother of Christ, which today makes a pilgrimage through the entire country announcing the message of the God’s love for man, came to the province of Ciego de Avila this Sunday, March 13, when it entered the town of Cunagua.

With the national tour of the Patroness of Cuba, the Cuban church celebrated the 400th anniversary of the discovery, in the Bay of Nipe, of the blessed image of the Virgin of Charity which has been venerated ever since in El Cobre. 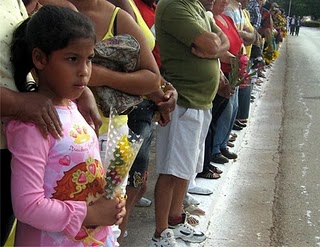 So she returns to Cunagua, she who is also known as Virgin Mambisa, because of what happened here in 1952, then to mark the anniversary of the Republic. So this time, at the entrance of the village, a woman’s voice through the speakers recalled that event, citing the chronicles that were published over half a century ago:

“Procession circled the center at eight at night praying the rosary, confessions until two in the morning and a Communion Mass with 201 communicants. It had been in central Camaguey the most enthusiasm, generosity and charity. “ 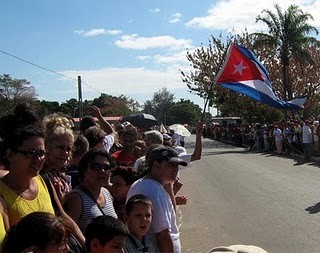 Now, perhaps with no less enthusiasm and hope, the streets of the town in the north of Ciego de Avila province are filled again with devotion. From very early in the day excited residents gathered on both sides of the road.

The first Catholic communities from the rest of the province arrived in a convoy of cars, trucks and buses, and soon after the image of Our Lady arrived, escorted spontaneously by people all around her riding bicycles. Monsignor Mario Mestril, bishop of the diocese, said a few words to the crowd before the procession to the local temple where he was to celebrate Holy Mass in a warm atmosphere. 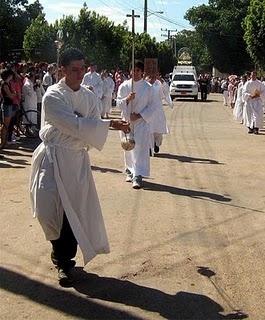 At the time of offering peace, the bishop made an exception in view of the significance of this day and didn’t skip, as is customary for Lent, inviting the community to exchange greetings. So I had the opportunity to wish the peace of Christ to those who were around me, including that large gentleman with the tight expression flanking me, who perhaps did not understand what it was and who, in response to my sincere attention, subsequently withdrew. Two days earlier, the most recent time I had been in contact, for just a second, with strangers, I had been robbed of my phone while boarding a bus, in an operation so professional that I was left in shock. For me, therefore, it was also a simple experience of overcoming fear, a cure or therapy of love for survivors that the Christian faith has always carried forward. 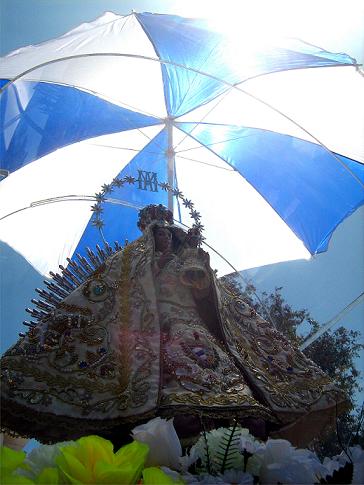 We share a day overflowing with signs. Faith in Christ the King is alive and, through the intercession of Mary, 400 years after the happy discovery on the waters of the Bay of Nipe, she walks the streets of Cuba.